Yesterday morning, together with Glenn Reuben, we left Davis Camp County Park and headed for Lake Havasu City.  In route we stopped to bird at Pintail Slough in the Havasu National Wildlife Refuge. Not the best choice because Waterfowl Hunting Season was in effect.  We settled for a short walk on the North Levy out of the hunting area and got in a few birds.  Traveling on we drove  to  Lake Havasu City where we stopped for groceries, miscellaneous hardware items, and a haircut for me. Next it was on to Lake Havasu State Park where we set up in the overflow for the dry camp rate of 25 dollars a night.  Just as we were stepping out the door to walk to Sonora Tacos Mariscos for One Dollar Taco Night, Glenn pointed out this beautiful male American Kestrel. 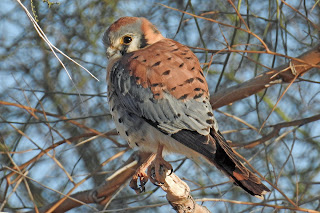 This morning our mutual friend John West joined us for a morning of birding here at Lake Havasu State Park. The park is blocked in the middle with a big renovation and installation of camping cabins, so John drove us around to the South Parking Lot to start, and we walked north along the shore line to the Cactus Gardens. My first photo of the day was this Great Blue Heron shown below. 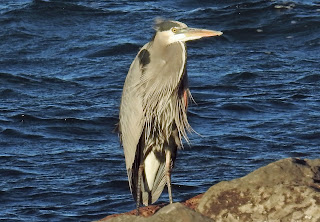 It was a terrible day for birding with a fierce cold wind from the north, but all four of us were determined to get in a bird walk. Our combined efforts produced the bird list that can be seen here.
Posted by The Rambler at 1:38:00 PM