This trip was a planned escape to the Oregon Coast. Planned to escape from the 90 degree temperatures in the valley. Planned on purpose to go the day after the Labor Day Weekend in order to escape the crowds. And, planned to escape from the renewed restrictions brought on from a resurgence of COVID 19. In general the idea was to head to Lincoln City to bird at Alder Island Trail, wander down the coast-line to Newport, turn up the Yaquina to Toledo, and circle back to Dallas, taking a few days and a couple of nights. 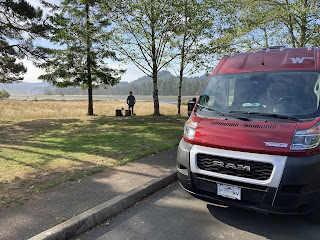 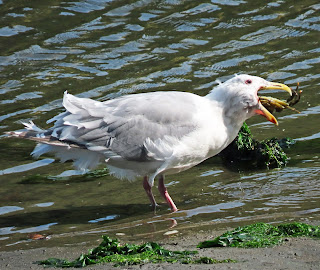 gull gulping a crawdad
Our next stop was the Alder Island Trail at the Siletz National Wildlife Refuge.  Here, a gull that was gulping down a crawdad caught our attention, and Jeanette's Merlin app identified it as a Glaucous-winged Gull. After completing a bird list, we set up our chairs and table outside the van and enjoyed a great salad lunch brought from the Dallas Retirement Village. Venturing on we stopped at Boiler Bay, parked next to the ocean and put down the bed to stretch out for a rest, and work on the bird lists. Here is our bird list. Boiler Bay State Scenic Viewpoint, like so many of the coastal Rest Areas, is now closed from 10 PM until 6 AM, a continuing disappointment to us, after years of parking overnight. I'm sure the Pandemic, plus last summer's wildfires was a double whammy as people sought out overnight parking.  The simple solution for us was to check out Beverly Beach State Park for a campsite.  Without the need for hook-ups, a tent site is plenty good for us, and they had lots of tent sites available. Twenty-one dollars during prime season. 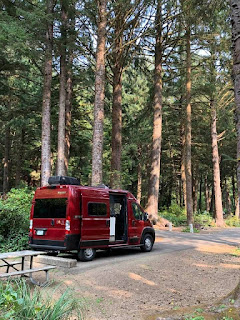 campsite C-18
We picked a campsite close to the rest-rooms, and fairly blocked from other campers.  Some down time, dinner, and finishing the series "Guilt" on PBS On Demand finished up our evening. We last camped here at Beverly Beach State Park on July 26-30, 2009. 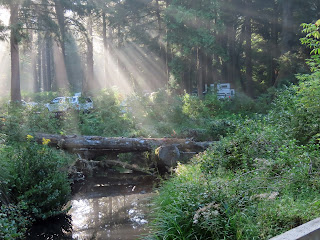 sunlight streaming through the trees
The next morning we set out to walk and bird on the Spencer Creek Nature Trail. See bird list here. The towering Sitka Spruce stream-side, and lush coastal vegetation, made for a dreamland hiking adventure, punctuated by the spruce cones bombing down from great heights by the harvesting squirrels. 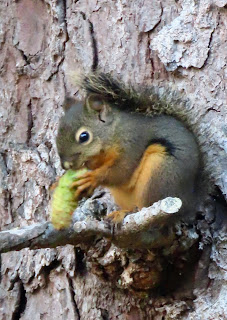 Douglas Squirrel enjoying a cone from his labor.
After hiking the Spencer Creek Nature Trail, we attempted a hike on the beach, only to turn back at edge of the sand because the fog was so dense we could not even see the ocean.  Checking out we traveled on to Newport for a stop at the Dollar Store for some shopping. Next we ventured up the Yaquina Bay Road, stopping to watch a flight of Brown Pelicans. We made another bird list, and enjoyed our lunch. 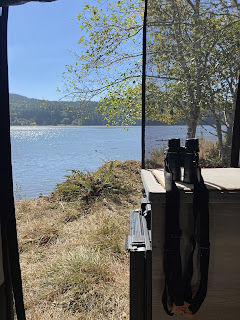 Lunch and birding stop
Our next planned stop was at Paddle Park for some afternoon relaxing, but the gnats where so pesky that we drove on to Toledo and sought some shade at the Yaquina & Pacific Railroad Society's train museum. We spent the afternoon enjoying the shade and the cool breeze coming in our back doors.  It was a very restful time and I got a lot of computer work done on photos. 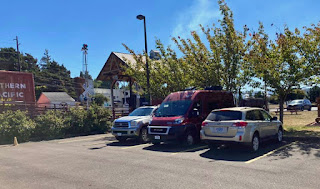 Yaquina & Pacific Railroad Society
After dinner, we were ready to move next door to the marina to park for the night, when Jeanette suggested we could just as well drive home.  That suddenly sounded like a good option as to opposed to parking in a hot parking lot.  In a little over an hour we were back home to the Dallas Retirement Village, rested and revitalized.