We have been itching to travel south to California for some sunshine and warmer temperatures. Not too far into California, but at least to the Red Bluff area in Northern California, where we knew that daytime highs would be in the 70's. Thursday night the 17th, the subject came up again, and a look at the weather forecast revealed that snow was expected in the Siskiyou's on Sunday the 20th, which meant we had two days to make it over the passes. The next morning, we started packing, and by 1:00 in the afternoon we were on the road. The 7 Feather's Rest Stop in Canyonville was our parking spot for our first night. We had a quiet night, so I was surprised when I stepped outside in the morning to find 6 other class B vans had parked adjacent to us during the night. 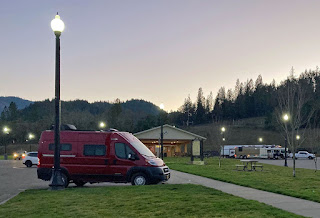 Canyonville to Red Bluff - Feb 19
While parked at 7 Feathers Rest Area we got a call from son Tony that he was picking up his new car in Davis, California the next day. We said, "Well, we are going to be in Red Bluff tomorrow." He was bringing grandson Bobby with him and agreed to drive up and meet us in Red Bluff. We met at Del Taco for a late lunch, and then took them on a short walk in the Red Bluff Recreation Area. Tony and Bobby left to check-in at the Hampton Inn, and Jeanette and I stayed and set-up in the Sycamore Grove Campground in site #29. Later in the afternoon we made plans for pizza at E's Locker Room, and Tony provided the transportation in his  beautiful new car, a 2022 Honda CR-V Hybrid. 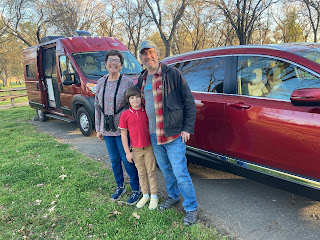 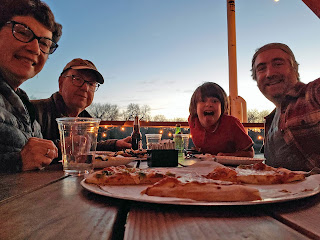 Layover Day at Red Bluff - Feb 20
We decided that we really wanted to get more birding time in the Red Bluff Recreation Area, so decided on a second night in the Sycamore Grove Campground. You can look at our morning bird list here:
eBird Checklist - 20 Feb 2022 - Red Bluff Rec Area - 33 species 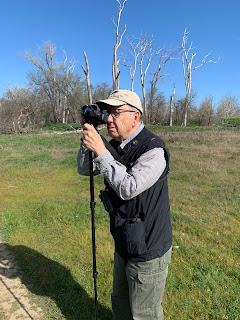 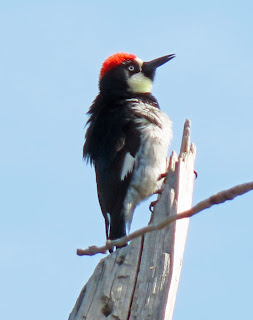 Red Bluff to Anderson - Feb 21
On our last morning at Sycamore Campground, we finally got to bird with local birders, Scott and Susan Isaacson. We had met them on our first day at Red Bluff when they stopped to look at our van, and we had been trying to get together to bird ever since. You can see our bird list here.
eBird Checklist - 21 Feb 2022 - Red Bluff Rec Area - 46 species 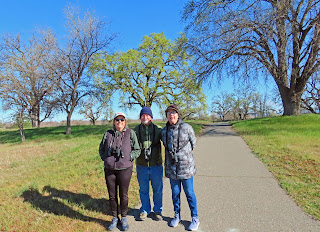 After saying our good-byes to Scott and Susan, we began our travel day.  First we had a hamburger at McDonalds in Red Bluff, then we were off to Anderson to the T-Mobil store to add some data to my phone after receiving a notice from T-Mobil at 4:30 in the morning that I was about to run out of data. Once T-Mobil had worked their magic, we were exhausted and elected to park in their parking lot for the night.  I spent the remainer of the afternoon and evening processing photos for the bird list, and we dined on take-out from Panada Express next door.
Anderson to Blue Lake - Feb 22
Our morning started with some confusion. In checking our route for the day, Apple Maps had changed yesterday's suggested route of Highway 299, to Highway 36. In attempting to make calls to find out if there was a problem with 299, I discovered that my phone did not work! This mandated a return to T-Mobil, which did not open until 10:00.  We got gas, and groceries while waiting. At T-Mobil much confusion reigned as to what the person had done the day before to my phone plan, and what changes were needed to correct the problem. It was 11:00 before we left, and we decided to chance 299 as it was a better road. Whiskeytown Lake Visitor's Center was our stop for lunch, and while there the snow flurries started. 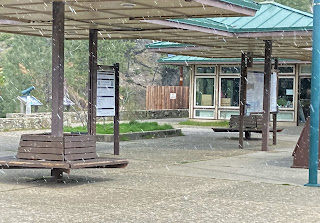 Alternating snow flurries continued with sunny areas as we climbed pass after pass, chain-up areas, and roadside snow. None posed a problem, but we discovered, that road construction and wildfire damage repair resulted in many traffic stops and delays, and perhaps was a clue as to why Apple Maps had suggested a different route. Before dusk we arrived at Blue Lake Casino, our parking destination for the night.  An inquiry of an employee about parking areas brought the information that because the casino was closed, RV parking was free!
Blue Lake to Brookings - Feb 23
Sunshine dominated the day as we drove Hwy 101 up the coast, enjoying ocean views and the Redwoods. Our first major stop for birding was in Crescent City for a walk and birding at the Beach Front Park, and then lunch and a second walk at B Street Pier.   A cold NE wind made 45-degree temperature fee like 30 something. 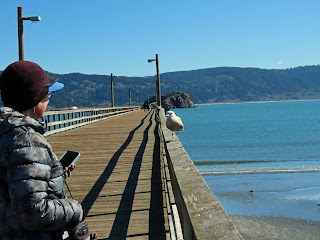 We continued on to Brookings for a major stop at Fred Meyers for groceries, gas, and propane before heading on to Harris Beach Rest Area for our overnight parking.  Much to our surprise and dismay they have instigated a new policy of 4-hour parking only!  Our second option was to stay in the campground across the Highway.  We had a nice talk with the host and learned that we could use a tent site for $20.  We made a loop through the campground and found a nice camp site, and as Jeanette was filling out the registration form, I discovered that we had no cell reception! That is an automatic rejection for us. I realize that many people think it's no big deal to go without cell service, but we depend on cell service for so many things, for example, all the bird reporting that I do, weather reports, road conditions, route planning, and not the least, connecting us with family and friends.
Our next step was to drive back into Brookings and look for a parking location.  After cruising around Brookings for a bit, we settled on the Fred Meyer parking lot.  After all, we had already given them a bunch of money for groceries, gas, and propane. It worked out fine and we had a quiet night.
Brookings to Dallas - Feb 24
By 7:00 AM we were on the road again, with a determination to drive straight home, and not stop for another night.  We chose the route up Hwy 101 to Newport, changing drivers every hour, and one person ate lunch while the other was driving. We were home before 2:00PM at 270 miles.
Posted by The Rambler at 1:05:00 PM 2 comments: