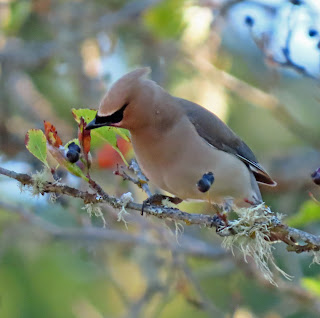 I took this photo of a Cedar Waxwing yesterday while birding with Jeanette at Buell County Park here in rural Polk County.  Today while looking a little closer at the photo, I realized the bird was feasting on Serviceberries.  That took me back to my first exposure to Serviceberry.  It was in the summer of 1971.  I was one of several adult counselors with a large group of high school kids on a backpacking trip sponsored by the Christian Church (Disciples of Christ) in the Eagle Cap Wilderness in the far northeast corner of Oregon. Don Henry, Youth Minister at the First Christain Church in Salem, was our leader and substituted Serviceberries for the "fruit of the vine" in a Communion Service.  As you can tell, Serviceberry has been permanently implanted in my mind, for now half a century. 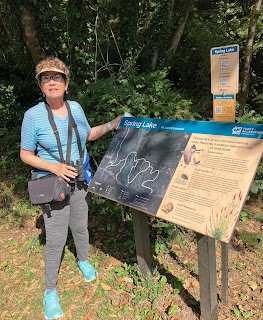 Lincoln City has 8 Open Space Parks with walking trails to explore. On this trip to the coast, we stopped to check out the birds at Spring Lake Open Space. Located just three blocks off of busy Highway 101, it is a quiet oasis away from the beach crowd, with its towering trees and dense shrubbery surrounding tiny Spring Lake.  Although this is an e-Bird Hotspot, birds were rather scarce, but the sense of solitude and an opportunity to stretch your legs, makes it a worthy stop. In checking Cascade Ramblings, I was surprised to find that it has been seven years since we were here last.  Checkout that post here. 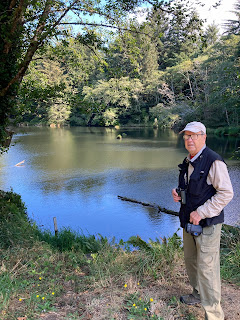 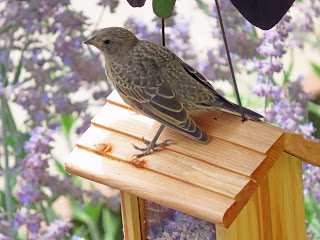 I was having a low-energy afternoon. I had been trying to pep myself up with a cookie and a cup of coffee and was trying to wade through "Thank You for Your Servitude", a somewhat entertaining book about Trump's ability to kick people under the bus once they had served his purpose. I took a break to stand out on our second-floor balcony, and suddenly caught a glimpse of some bird activity below in the Central Courtyard.  I stepped back inside and grabbed my camera and started taking photos, thirty-two in all. To my surprise, I had a couple of juvenile Brown-headed Cowbirds at my feeder. To understand my excitement, you need to know that Brown-headed Cowbirds do not make a nest of their own, they are unique in the birding world of laying their eggs in another bird's nest.  Of course, the next question becomes, who's nest did these juveniles come from.  Hummingbirds, White-crowned Sparrows, and Dark-eyed Juncos have all had nests in this courtyard, and I did notice an adult male junco acting parental in the same area. I'll probably never know, but my brain was stimulated, and my normally energy has returned. 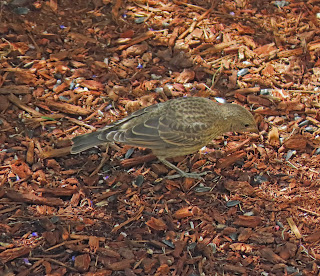 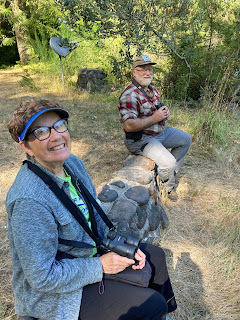 Jeanette & Glenn at the Siltcoos River
A string of days in the upper 90s provided the incentive for us to pack-up our Winnebago Pocket van in a quest for cooler temperatures on the Oregon Coast.  Early Monday morning we headed south in the Willamette Valley. We made stops to birdwatch at Adair Wildlife Area north of Corvallis, and Monroe City Park on the banks of the Long Tom River, before traversing the Coast Range, where we watched the temperatures begin to drop. Our first camp set-up was at the Siuslaw Nation Forest Tyee Campground along the Siltcoos River where our friend, Glen, volunteers as the Camp Host. Glenn served as our guide on a bird walk at Westlake County Park Boat Ramp, and an evening in Tyee Campground sitting on the banks of the Siltcoos River.
Early Tuesday morning found us moving our hunt for birds with Glenn to the Carter Lake Campground, followed by a search for more birds at Stables Road next to the Smith River. We took a break for lunch in nearby Reedsport. Back to the camp at Tyee, we said goodby to Glenn and headed north to Florence for Jeanette to do some shopping at Fred Myer and for me to take advantage of better cell service to work on bird observation lists. Waldport became our next destination as we traveled over Cape Perpetua, enjoying the ocean views.  In Waldport we settled in at the Lint Slough Trailhead where we made a stationary count of birds.  After dinner we did an evening walk upriver on the Lint Slough Trail counting addition birds. 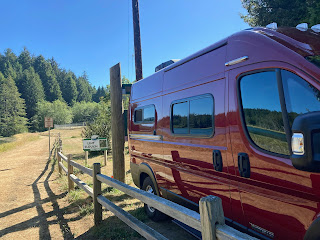 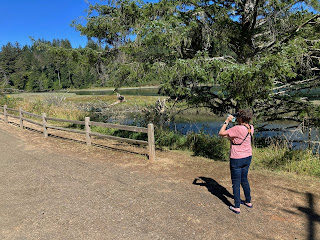 Wednesday morning found us traveling up the coastline dodging in and out of fog and bright sunshine. Our first stop to bird was at the Welcome Center at the Beaver Creek Nature Area. This is where we volunteered our summers in 2013 and 2014 as hosts.  Despite the big Welcome Center sign at the entrance, we were surprised to find the Welcome Center is now the Coastal Region Office, with a "closed" sign on the door and phone numbers to call if you needed anything. Amusing, there is no cell service at this location. 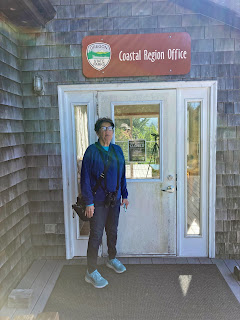 Next stop was at our favorite Alder Island Trail in the Siletz Bay National Wildlife Refuge. First was lunch, a real plus with all the comforts of the van, and then our birdwalk on the trail. Birding was slow as one would expect in the middle of the day.  But the most amusing thing we saw was a lone Osprey bringing a stick to the nest.  This time of year, most juveniles have left the nest.  My guess is that this is a young bird, with its first visit north, and it is practicing nest building for next year when he will attempt to attract a female. 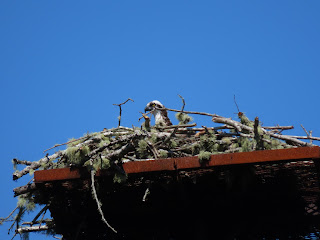 This finished our three days on the Oregon Coast, where we enjoyed the cooler temperatures.  We completed 10 different e-Bird Observation Lists, spread over 5 different counties. It's always a fun adventure in the van for a few days, and always great to return to the luxuries of life at Dallas Retirement Village.
Posted by The Rambler at 12:28:00 PM No comments: