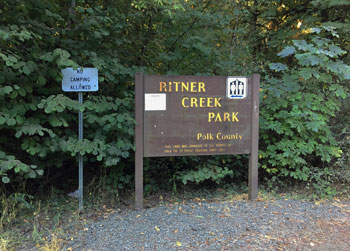 This morning Jeanette and I went to explore and bird at Ritner Creek Park.  It's now been a week since we had Buster put down, and we are still seeking to find the balance in a group of 2 in place of 3. In our minds we now have a lot more freedom in time and place, but in our hearts this is a loss of companionship on all our adventures. Today, though it seemed a bit odd,  it was time to seek out an adventure on our own.  Ritner Creek Park has been a place I have wanted to visit for many years, possibly clear back to when I was a fisherman. It's the only one of the ten Polk County Parks that I had not been to, and possibly the most remote.  Located at 750 feet elevation down a gravel road off of Kings Valley Road, it's a place you would not just to happen to pass by.  For amenities, there is pit toilet, and gravel paths that lead across a bridge to a half dozen picnic tables with fire pits. Moss covered Bigleaf Maple trees, and giant tall Douglas Fir trees hide this park and provide abundant shade for the gentle flowing Ritner Creek on it's was to join the Luckiamute River.  We arrived before 7:00AM to a silent park, save for the bubbling creek.  We first noticed a Steller's Jay, and then a couple of Robins, and then the excited cry of a Piliated Woodpecker, put still not enough birds to live up to our expectations. As we started to drive away on the gravel road the morning sun finally had an effect on the bird population and we overwhelmed with bird identification challenges.  Click on our bird list here.  We will be back! 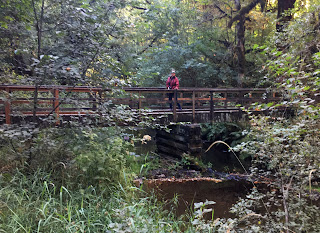 So Much More Than Just Birds

We got a call from our friend Glenn last night to ask if we would be going birding. Well duh? We decided to meet at Adair Pond this Morning. We all three love to go birding together, which we have done over the years in Oregon, Arizona, and California, but beyond that we enjoy lots of conversation, and all forms of wildlife we come across. Today was a perfect mix of all those things we so much enjoy. 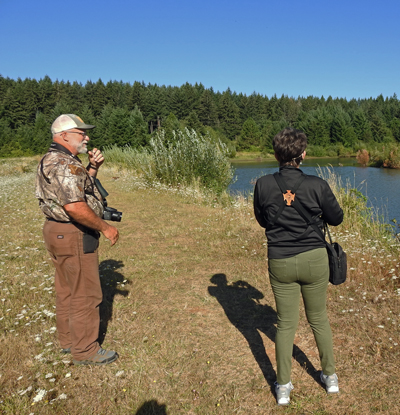 Glenn and Jeanette at Adair Pond 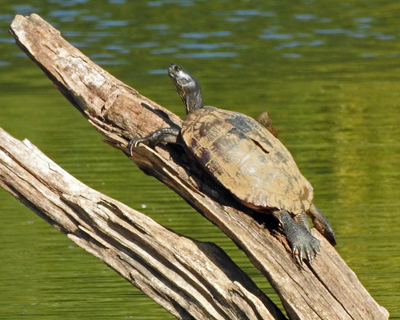 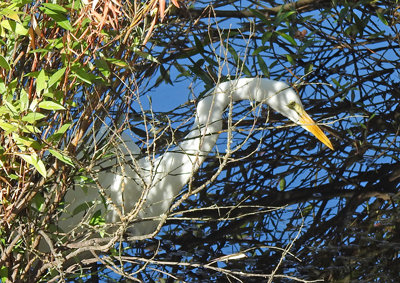 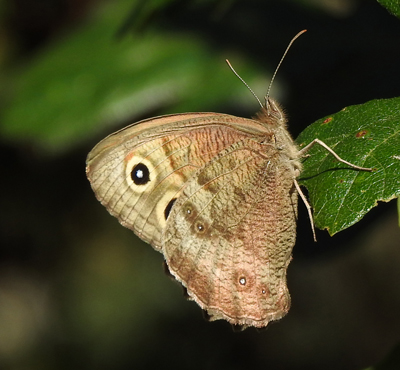 Unidentified Butterfly
Posted by The Rambler at 5:12:00 PM 1 comment: 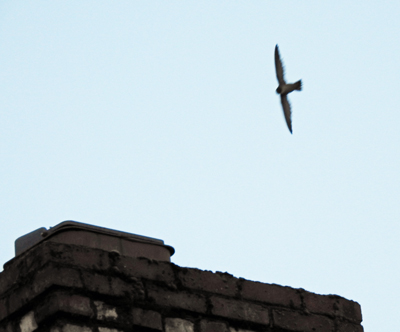 Last night my sister Susan invited us over to their house to watch the Vaux's Swifts fly into their chimney.  We went over with camera and chairs to watch the spectacle which began about 8:30 at sundown.  To the average non-birder it could be viewed as just another oddity of  bird behavior, but to some one obsessed with birds as I am, it was a moment to cherish, examine, document, and research. My sister and her husband have lived in their house for over two decades, but this is the first year they noticed the Swifts.  They were first puzzled by loud peeping noises, which they discovered where coming from their chimney, and eventually decided where coming from Vaux's Swifts nesting. Last night Jeanette and Susan concentrated on getting an exact count as the birds entered the chimney (116), while I clicked away with my camera trying to get a photo.  We have since learned a number of interesting things about these amazing birds that travel from their wintering grounds as far as South America.  They are always in flight, even as they migrate thousands of miles, they are able to sleep as they cruise at high altitudes on their journeys both south and north. They make their nest in a variety of places, chimneys are one of them.  But, the spectacle we witness this time of year is their communal gathering in preparation for their journey south in a month or so. All these are facts on the grand scale, but the local significance of our observations last night of these 116 Swifts is the large number here in Dallas and Polk County.  Prior to our count the largest number reported in all of Polk County to e-Bird, a world-wide data-base, was 77 in August of 2012 in Independence. So now we have a new high count for Polk County and a new location to watch for the coming and goings of the Vaux's Swift.
Posted by The Rambler at 1:22:00 PM 2 comments: 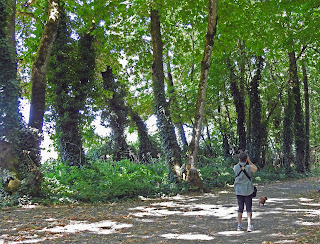 This pandemic is driving me crazy, and it's hard to figure out a place to flee, the beach makes sense temperature wise, but too many people seem to think the same. I think I might have the ticket to my sanity here at Nesmith Park. It's a Polk County park located along Rickreall Creek next to the Polk County Fairgrounds, less than 5 miles from where we live in the Dallas Retirement Village.  In these hot days of summer, it's shady trails are a real oasis. So here is what happened today, and I think it might become a routine.  While Jeanette played pickle ball, I went out to Nesmith to cut ivy.  I completely circle the trunk of a tree, making sure to cut every strand of ivy, blocking the life flow to the ivy, which dies and saves the tree from eventual death. As you can see in the photo I will not be running out of work. After a good work-out I returned to our apartment, we took showers, packed a picnic lunch and came back to Nesmith with Buster to roam the shaded trails and count birds. One other couple were off in a corner picking blackberries, and another person came through with a dog.  In other words, we practically had the park to ourselves, no fear of crowds here.
Posted by The Rambler at 2:05:00 PM No comments: