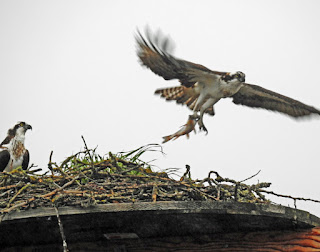 The saga of the Osprey nest on Murlark Ave continues. Yesterday morning when I stopped by the queen was on her throne, and it appeared two male supplicants were seeking her approval. They where circling overhead, hovering and making quiet a display.  In this photo the male, who I believe is the favored one, came in with a fish for a brief moment and then left.  I have watched this behavior before at other nesting sites and what normally happens is the male will perch near by and eat the head off of the fish before bringing it back to the female. This nesting site is currently the best location to watch the Osprey in their annual nesting routine.  I have suggested to eBird that it be classified as a Hot Spot, and it is now so designated.  This brings attention to the site with other birders, helping them locate and hopefully contribute to the data base with observations and photos.
Posted by The Rambler at 6:33:00 AM 3 comments:

Back To Our Old Haunts 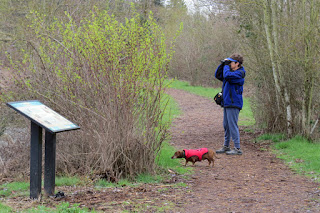 We have been back home from our winter in Arizona for over two weeks now, and are enjoying birding at some of our old haunts.  Today we went to Fairview Dr Wetlands in South Salem.  It's on the list of our all time favorites, and possibly our oldest. I checked and we have been birding here for 20 years.  Here is the link to the oldest bird list is could find. We were starting to get serious enough that we started to make a written list then.  At that time we lived with-in walking distance of the wetlands.  We were much more into hiking at that time, more so than birds, so hiking to the wetlands  was simply a destination for a hike. It has developed over the years with the addition of wonderful trails and lots of native plantings.  A trip there now always brings back a flood of memories from our many birding experiences over the years. Here is the link for today's trip.
Posted by The Rambler at 4:04:00 PM No comments:

Building of the Nest 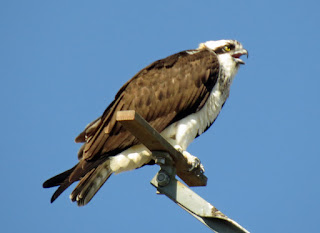 The saga of the Osprey nest site on Murlark Ave in West Salem continues.  We orginally spotted the female at the nest site on Sunday.  Monday we checked, no birds.  Today, Tuesday when I checked the female was back on the pilots perch.  I stopped to take some photos, and she started giving an excited cry, and then the male flew in with this stick.  A fresh cotton wood limb with buds. It seems that they are getting right down to business. 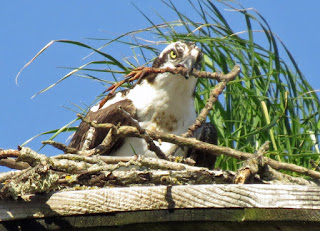 First Osprey of the Season 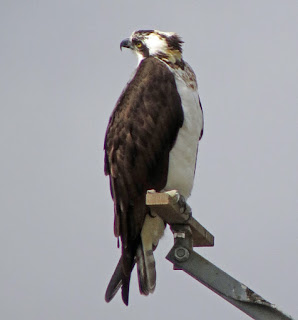 Yesterday while returning home from visiting our grand-daughter in Springfield we decided to swing by the Osprey nest site on Murlark Ave in West Salem to check for possible Osprey.  Each year it seems to be the first nest site to be occupied by returning Osprey.  True to form, we found our first Osprey of the season.  Osprey make their migratory trips to Central America for the winter, and back north for the summer individually, getting together only when back at the nest site to breed and raise their young.  I have read that it is usually the male that arrives first at the site and then waits for the female.  However, based on the spotted breast, called a necklace, this is most probably a female. Interesting also is that this particular female's necklace is unusually high up the neck, and this is true of the photo I took of her last March, which makes me think she is indeed the same female.  Check out that blog here. For some reason, maybe she winters closer than some, or maybe she takes a shorter route, she appears to be the first back in West Salem year after year.
Posted by The Rambler at 8:32:00 AM No comments:

The Swallows Are Back! 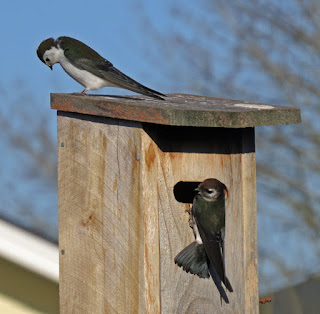 We have been back home in Salemtowne for four days now, and this morning while working on the motor home in the driveway, I thought I might be hearing swallows. Strange I had just looked on eBird earlier to judge their arrival date to figure out when I should put up the nesting boxes.  Last year it was on the 20th of March, so I decided to work on the motor home this morning and put up the nesting boxes later.  I paused from my work and looked around, and low and behold there were three or four swallows circling my front yard. I stopped my work and put up the nesting boxes and soon was rewarded by this pair of Violet-green Swallows coming in and inspecting perhaps their nesting site for this season. The male seems to be checking out the roof, the female looking around the door way.
Posted by The Rambler at 11:05:00 AM 1 comment: 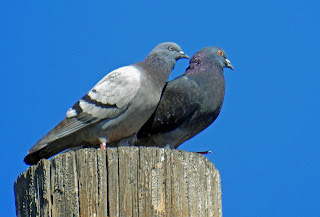 Rock Pigeon
We are in-route through the center of California, and aware of the signs of spring, green grass, fruit tree blossoms, and honey bees hitting the windshield. Yesterday we stopped for a break in Madera at their local park, the Lions Town and County Park.  Ironically we stopped here last March also.  A pair of Rock Pigeon were on the top of a power pole doing their Spring business. Click here for our bird list.  Our stop for the night was at Dos Reis County Park in Lathrop, were a walk in the last sunlight of the day these to Eurasian Collared-Doves were enjoying an intimate moment.  Click here for our bird list.  Everyday we drive a couple of hundred miles and get in a walk or two.  We are lined up to get over the Siskiyous on Wednesday, before the next moisture hits on Thursday. 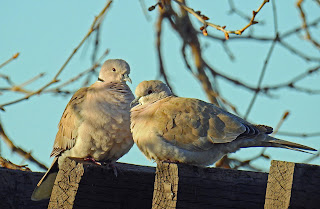 Eurasian Collared-Dove
Posted by The Rambler at 6:31:00 AM No comments: 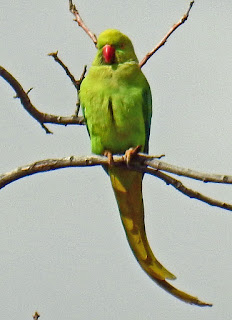 Do not dismiss this post as a silly little story about a tiny parakeet. This is a big story about a big bird.  This is a much larger bird than you would think to be carrying the parakeet name, at sixteen inches in length. We found this bird while birding at the Hart Memorial County Park in Bakersfield California yesterday. It was quite by accident, and I took a photo hoping to learn more about the bird, and it turned out to be a new Life Bird for us. Not much can be learned from looking at bird guides, but by searching the Internet specifically for Bakersfield, I learned it is a pretty big story.  In 1977 a huge wind storm of 100 miles per hour in the area broke apart a private aviary  and released some birds including two pair of Rose-ringed Parakeets.  They were able to successfully reproduce and today there are in excess of 3,000 birds completely living a natural life in Kern County  Birders from all over the world travel to Bakersfield to seek out this large beautiful parakeet. We were amazingly lucky to just stumble on this bird in the park. True this is not a native species to North America, but like other immigrants to this country, their numbers are so large they should not and can not be denied.
Posted by The Rambler at 8:11:00 AM No comments:

Stop at the Salton Sea 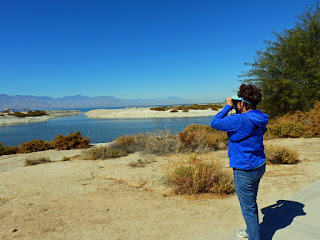 We left Vallecito Stage Station County Park early yesterday morning and continued our circle of the Salton Sea. This area has so many memories of past trips here to the Imperial Sea View Spa where my mom, and later sister Kathy and husband Gary lived. We particularly enjoyed recalling bicycle camping tours that we made around the sea, the Imperial Valley, and Anza-Borrego State Park. Our stop for the day was the Salton Sea State Park Visitor Center and Campground.  The nice ranger at the gate informed us that the campground was closed due to a sewage problem, but said that the Mecca Beach Campground one mile to the South was opened.  He waived the day pass at the Visitor Center so that we could bird, trusting us to camp later at Mecca Beach, eighteen dollars for a dry site. The water level continues to drop in the Salton Sea, but the birds are still numerous, and the weather was perfect.  We made a good observation list of 27 species with 13 photos, which you can see here.
Posted by The Rambler at 5:16:00 AM 2 comments:

Soaking Up The Sun 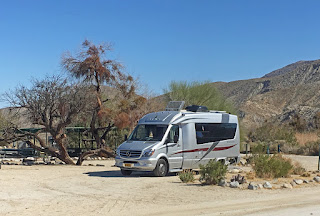 We are continuing the quest to spend our time in warm and sunny areas, and with that in mind we drove south today to the Vallecito Stage Station County Park.  We stayed here last winter and enjoyed our time and birding.  Again this year we are the only campers in the 44 site RV area.  There is also a tent camping area, and an equestrian area, both of which are also empty.  We like it quiet, so we are happy.  It is one of the few campgrounds in the Anza-Borrego Desert that has cell service.  It is dry camping, meaning there are no hook-ups, but the site we always choose, number 24, is right next to a water faucet, so we hook up our hose, and we have solar to take care of our electical needs. This winter has been the grand experment with solar.  We had solar system installed this summer, but it wasn't until we were totally dependent on it at Cattail Cove State Park this winter that we came to realize that it was taking care of our electricity.  Basically we never actually need to be hooked up to electricity. Every day our solar panel soaks up the energy from the sun and charges up the batteries.  So, when I refer to soaking up the sun, I am not only refering to Jeanette and I soaking up some sun, but our RV is also soaking up some sun.
Posted by The Rambler at 5:28:00 PM 1 comment: