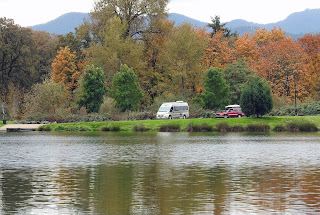 For the second year in a row, Jeanette and I have made the decision to stay home for the winter rather than travel to Southern California and Arizona.  Yesterday morning while in-route to Huddleston Pond to go birding we were going through the pros and cons of our decision.  We are at the age where it is much more stressful to travel a lot of miles, but beyond that we seem to have a good time right here in Oregon.  Our day turned out to be a pretty powerful reminder of how much adventure we get to enjoy right here close to home. As we circled the pond counting and photographing birds, we noticed one bird was not one we normally see.  We spent a good amount of effort in trying to get a good photo to be able to make a positive identification, which was hard because it seemed determined to feed along the edge of the pond opposite of where we were, and it continued to disappear as it dove under water in search of food. Back at the van, I downloaded the photos into my laptop where I could get a closer look and then searched on my phone apps for an identification.  In the end I came up with a female Red-breasted Merganser.  I needed to be positive because it was a species not expected to be seen here.  They are a species normally found in the bays and lower rivers of the coast. In fact a Red-breasted Merganser had never been reported in Yamhill County or Polk County! But I did have the photographic evidence, and by the time I got up this morning two of the top birders in these two counties had found and reported this bird.  So, we seem to discover all the excitement we need to keep us satisfied, and the Autumn colors are glorious. 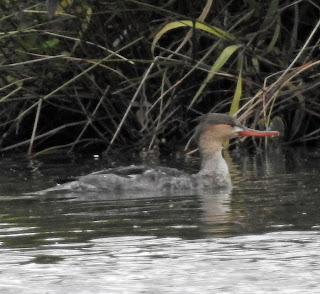 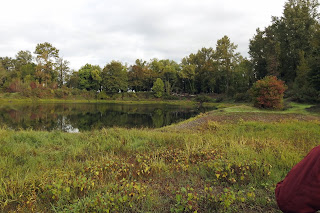 Most of my blog posts are about travel experiences and birding.  This may give the impression to readers that the best birding involves traveling to better birding locations.  Not true.  We bird almost everyday, and usually close by, and we continue to be thrilled with the birds we find.  Today is a good example.  We hadn't made a selection of where to bird until we were almost out the door, and at that moment we settled on nearby Wallace Marine Park, only about two miles from home. I was hoping for some water fowl, and the old gravel quarry in the park is always worth checking out. For the complete bird list click here. 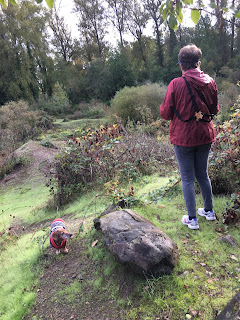 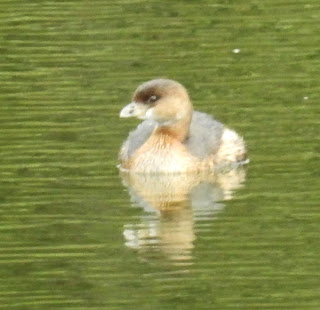 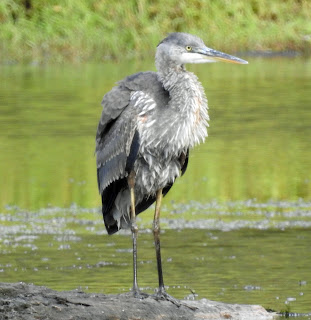 juvenile Great Blue Heron
Posted by The Rambler at 1:33:00 PM No comments: