A Trio of Grebes

Yesterday after finding the Surf Scoter at the Turner Rd Ponds I also photographed a number of other birds.  When I got home and was working with the photos I was struck by the fact that I had several different species of Grebes.  In fact I photographed three different kinds of Grebes.  Starting from the top is a Pied-bill Grebe, a very common year-around resident, but in it’s non-breading plumage it lacks the distinct dark marking in the middle of the bill. Next is a Horned Grebe, an uncommon winter resident. Last is a Western Grebe, also an uncommon winter resident and probably the largest and most graceful looking of the Grebes. 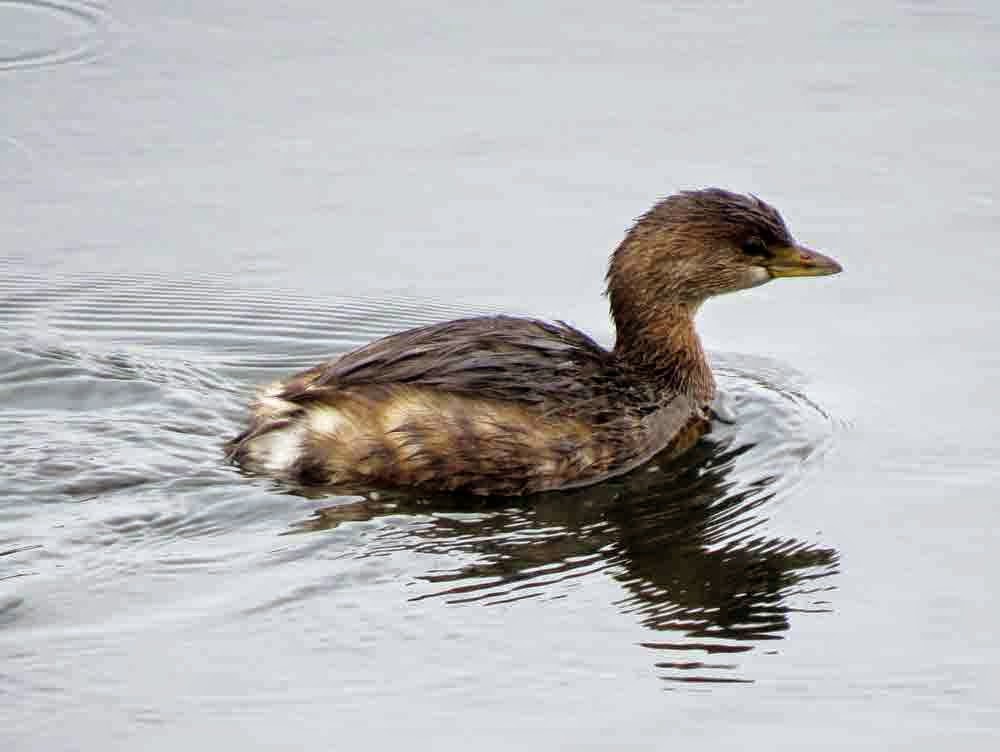 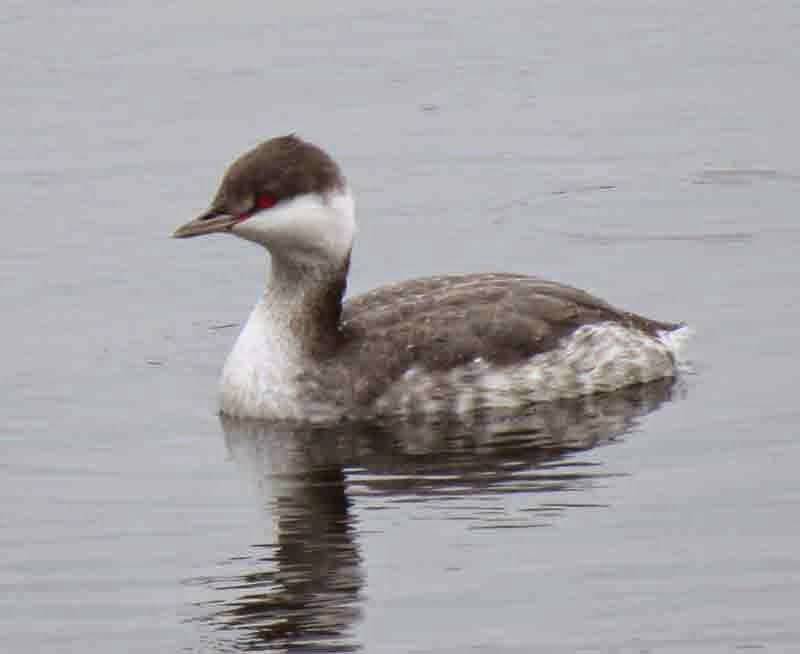 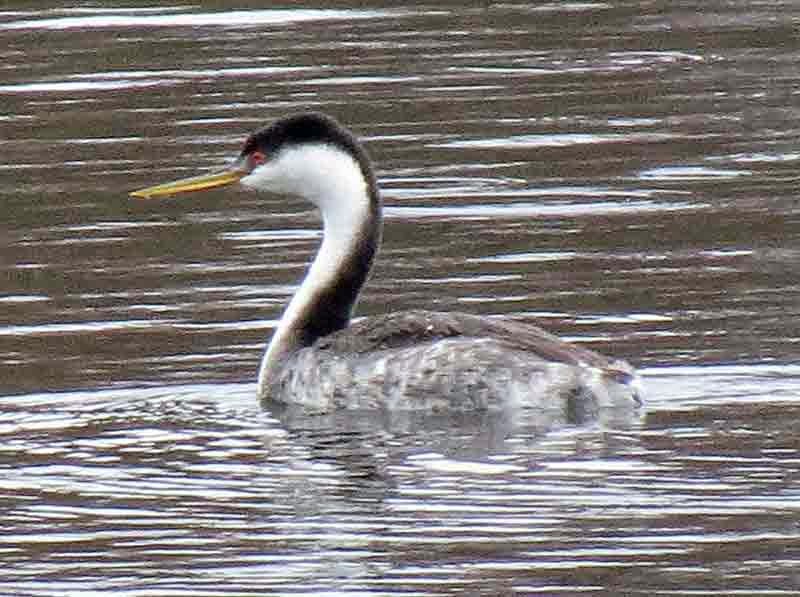 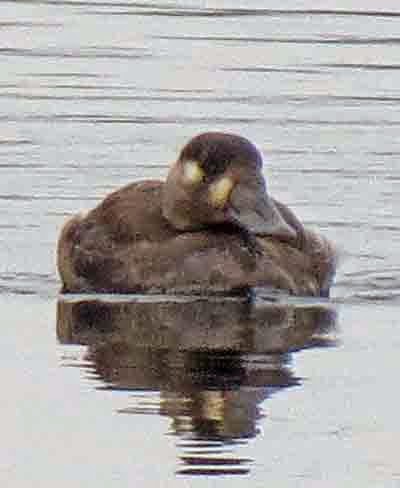 A female Surf Scoter was reported yesterday morning by Roy Gerig, and by afternoon two more people had spotted it.  The bird was seen on the pond in front of the Lowe’s Home Improvement Center by the Salem Airport. As a Hot Spot for eBird the pond carries the name of Turner Rd Ponds. My guess is that name harkens back to the days when there where several ponds there left from gravel mining, but a good part of the area has been filled in for Lowe’s, Walmart, and an assortment of smaller stores leaving only one pond. The exciting thing is that Surf Scoters are normally seen on the coast, not so far inland. Not having any pressing obligations this afternoon I decide to go have a look and see if I could be fortunate enough to find it.  To my astonishment it was the third bird I saw when I got there.  I first noticed lots American Coot’s, a dime a dozen bird, next I spotted two Western Grebes, a some-what unusual bird, and then I noticed the Surf Scoter directly in front of me.  My lucky day! 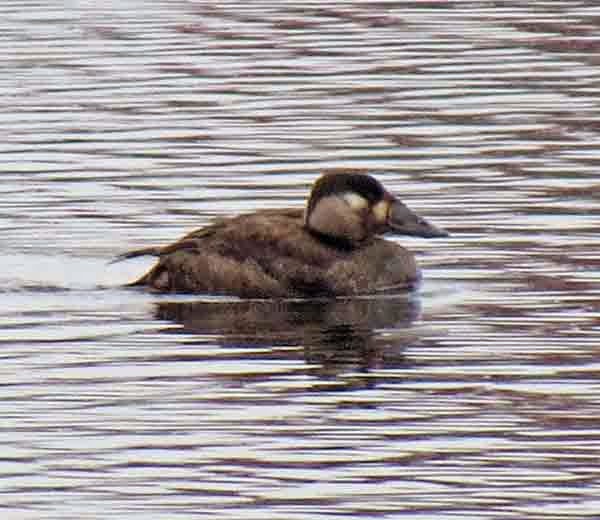 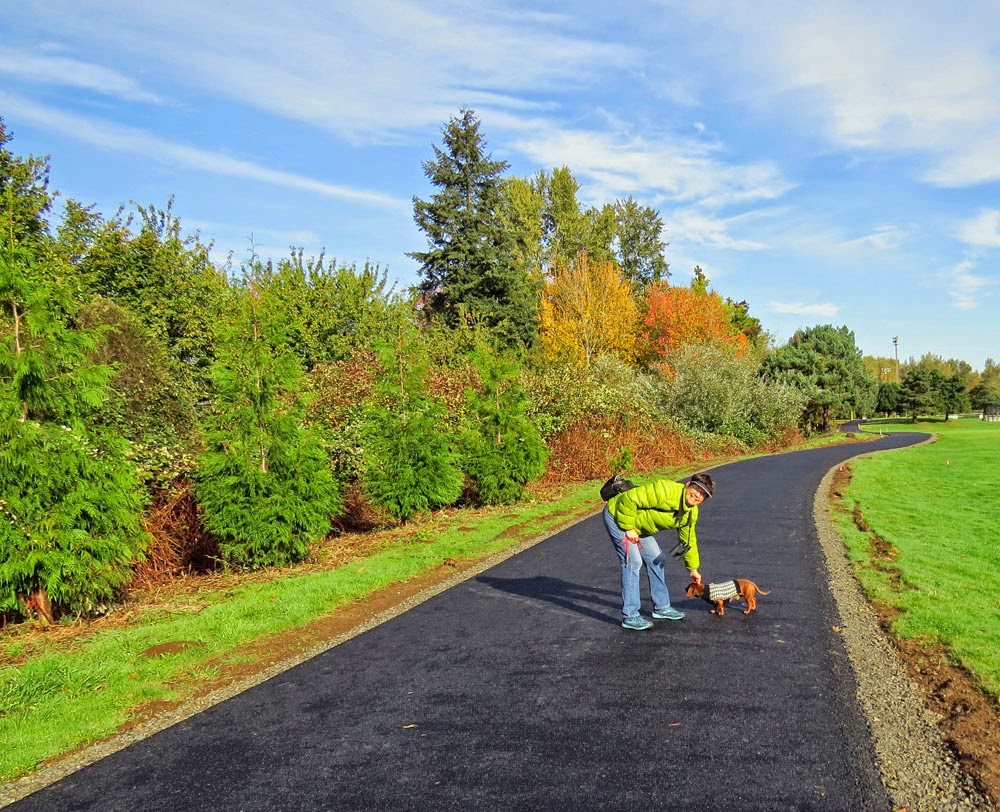 Yesterday was the last day in as far as the weather forecast could project for a dry day, so we made sure to get out and enjoy the sunshine with a walk and some birding. It is what we do; it works for all three of us, everybody wins. We get fresh air, sunshine, and exercise both physical and mental. The mental exercise is bought about by the challenges of bird identification, and then there is the photo challenge as well. We went to Wallace Marine Park in West Salem which is only two miles from our house.  We go there repeatedly, no one else seems to bird there, and the park has a good diversity of habitat and so far this year we have identified fifty three different species of birds. We always return home renewed and refreshed.
Posted by The Rambler at 12:14:00 PM 1 comment: 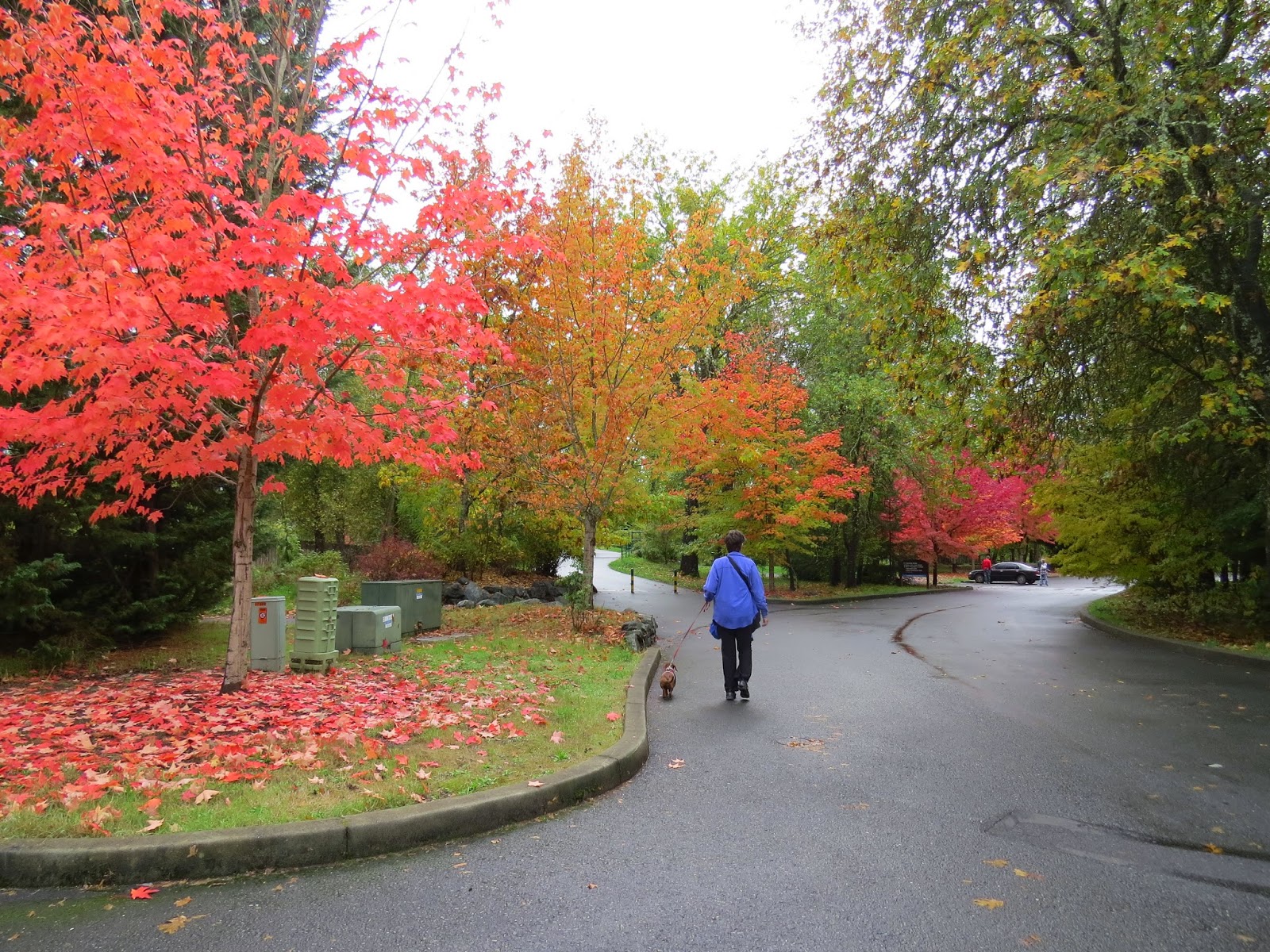 While having suspension upgrades done on our Winnebago View motorhome at Henderson’s Line-Up in Grants Pass we took a couple of nice walks to near by parks on the banks of the Rogue River.  On the near side we found Tussing Park and a pedestrian bridge across the river took us to Reinhart Volunteer Park where this photo was taken.  Beautiful area and we counted a good number of ducks in the river, lots of Canada Geese and some colorful Mallards, Wood Ducks, and Common Mergansers. Always feels good to get out and get some exercise, fresh air, and enjoy the fall colors.
Posted by The Rambler at 6:43:00 AM No comments: 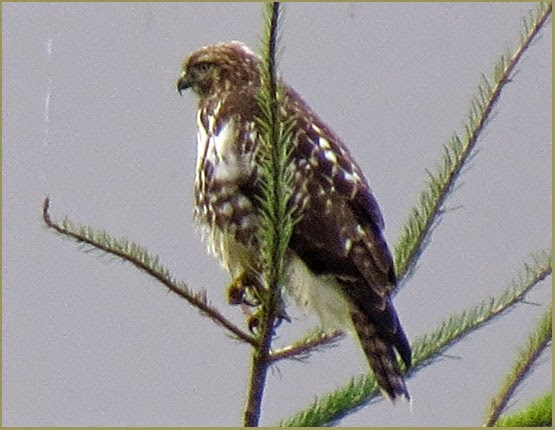 Yesterday mid-day during a brief dry point we went to check on the Fairview Wetlands to check on the water level and see if there were any new migrating birds.  We found a little more water, but nothing new in birds until Jeanette noticed this hawk.  So much white in the plumage that it reminded me of a Rough-legged Hawk.  I made a quick check on one of my bird Apps, sure enough.  Back home I did some research, Rough-legged are found here in the Willamette Valley October through April, that fit.  And it would be a new county bird for me and even the first of the season for me as well. I was all set to post a blog. But first I decided to look at the photo I had taken of a Rough-legged last winter at Luckiamute Landing State Park.  Oops, not the same! Back to the guides in search of a match.  Low and behold it was a juvenile Red-tail Hawk. Drats, I’ve already reported lots of Red-tails. I almost made a mistake and wrote a wonderful post about the wrong bird!
Posted by The Rambler at 6:58:00 PM No comments: 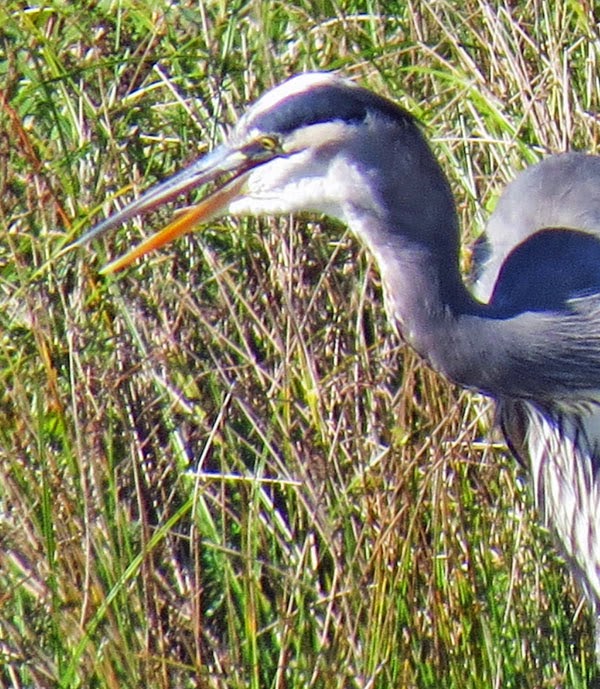 While birding at Lyon’s City Park on Sunday we spotted a Great Blue Heron. As we watched it through binoculars, Jeanette noticed that it was strangely standing with its mouth open.  As we watched a little closer we noticed that not only was its mouth open, but its throat was all a quiver. Jeanette said, “Its going to cough up a pellet!” Sure enough, a few more antics and out came a pellet. As it turns out Herons like a great many other birds that that swallow their prey whole cough up the indigestible parts in a form of a pellet. I wasn’t able to catch the exact event, but you can see in the photo the Heron is getting ready for a repeat performance. We owe our insights into Herons and pellets to Elva Paulson in a wonderful post of hers from last year in Elva’s Field Notes.
Posted by The Rambler at 6:51:00 AM 1 comment: 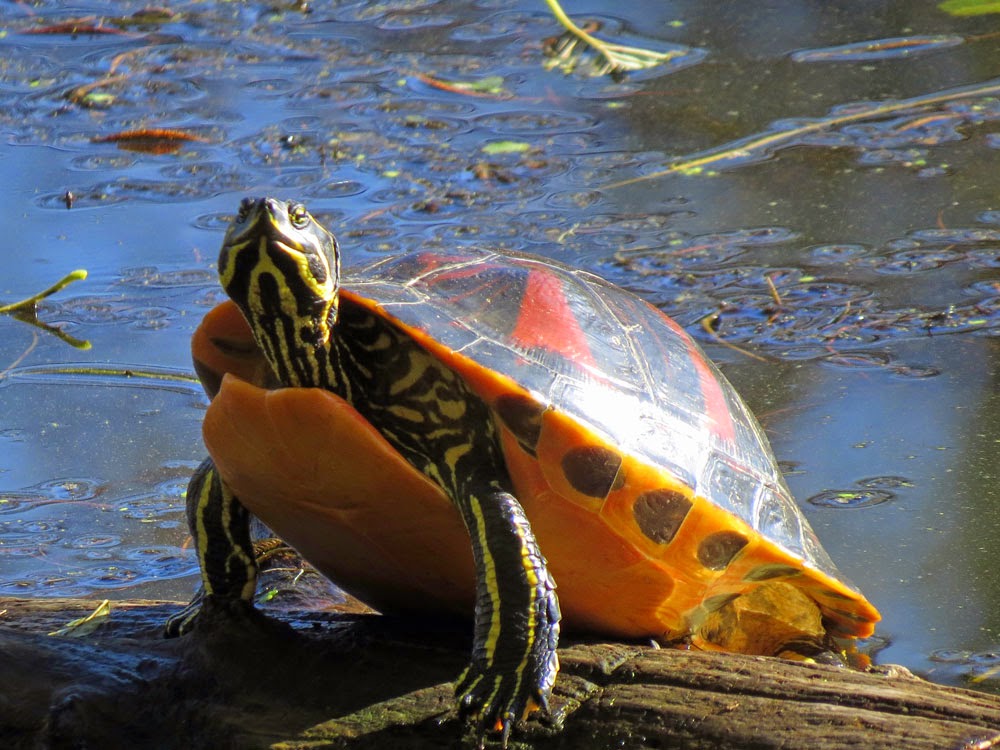 This is a Painted Turtle I photographed yesterday morning while birding at Lyons City Park. When I got back home I checked myself on the Oregon Depart of Fish & Wildlife website, and discovered that our native species, the Western Painted Turtle does not look the same in that it is without red marks on the top shell and the bottom shell is red with black marking not a solid yellow. Hmmm, troubles. Next, I Googled Painted Turtle and from the Wikipedia page it looks the most like a Southern Painted Turtle with a solid yellow lower shell and bright red marks on the top shell.  If that’s true, how did it get here, because the range for the Southern species is shown as Arkansas, Mississippi, & Louisiana? Hmm, more troubles. Was this turtle abducted from some place in the South and released unharmed in this pond in Lyons Oregon? ---- If you or anyone you know, knows anything about a missing a turtle please contact me.
Posted by The Rambler at 9:00:00 AM 1 comment: 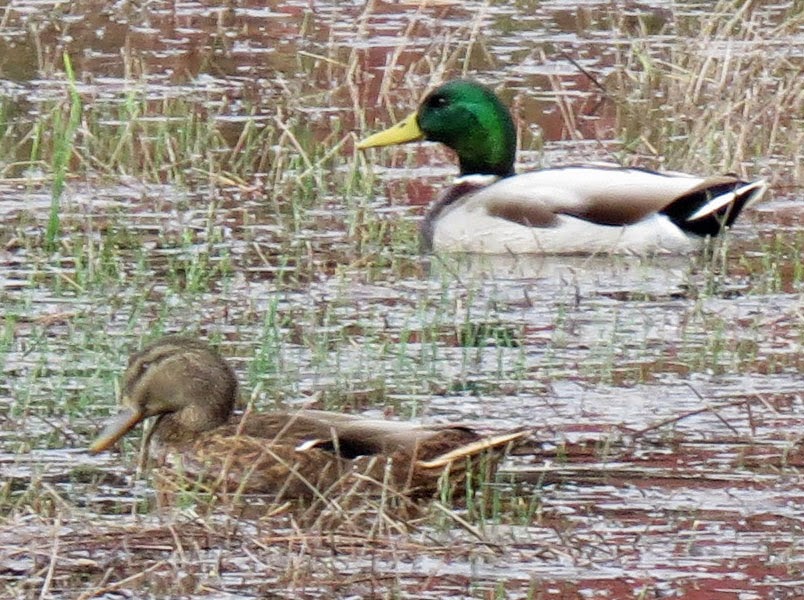 Recent rains are now giving birders something to smile about, the return of some wetlands. I went out to check on the Fairview Wetlands in South-East Salem this morning to see if the rain had made any difference.  The last two times I was there the “wetlands” were bone dry, and so of course without any water fowl, but this morning there was some water in the lower pond and eight Mallards were enjoying it.  Hopefully we will continue to get more rain and add water to the wetlands. Hard to believe that I am looking forward to more rain, but in this case I know it will mean more opportunities to observe birds.
Posted by The Rambler at 12:44:00 PM No comments: 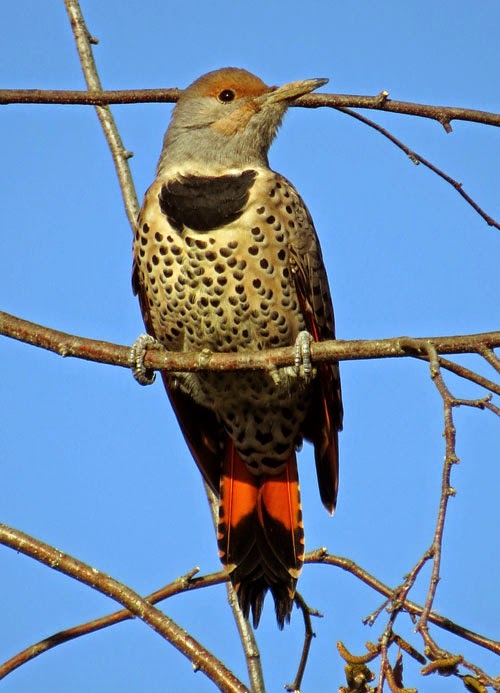 Yesterday I walked over four miles while birding in three different locations in West Salem, yet in the end the best photo of the day was taken back home in the afternoon while sitting in my patio.  I spotted this female flicker in our neighbor’s tree and quickly retrieved my camera from my den. You can easily see why this has been known as a Red-shafted Flicker. There was also such a bird as a Yellow-shafted Flicker.  But currently the two flickers have been lumped together and both the Red and the Yellow are now recognized as the Northern Flicker.
Posted by The Rambler at 9:22:00 AM 3 comments: 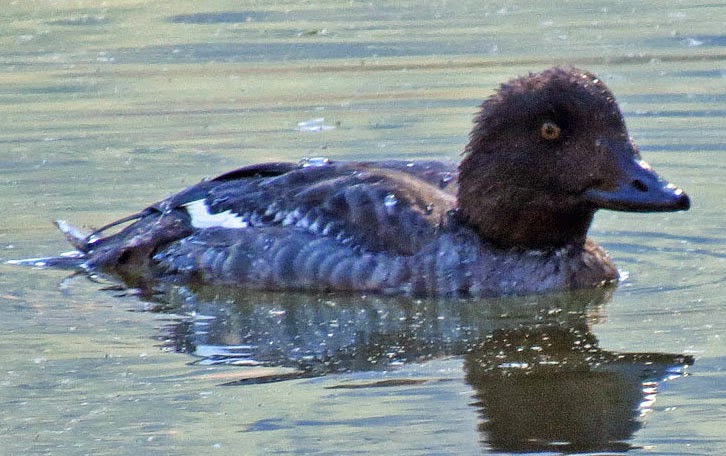 This is a female Common Goldeneye I photographed on Sunday’s hike to Pamelia Lake. Notice the large dark bill and sloping forehead. It took a lot of checking on my part to come to that conclusion because in Linn County the most common or usual goldeneye would be the Barrow’s Goldeneye, and this bird, the Common Goldeneye is ironically considered “rare”.

It’s taken me several days to recover from Sunday’s hike to Pamelia Lake.  I’m not actually talking about physical recovery, but office time recovery.  It takes me quite a bit of time to process the photos, identify birds and in this case also mushrooms, report bird observations to e-Bird, post on my blog and Trip Journal. I also spent considerable time looking at past records in Linn County on Golden-eye observations. Pretty soon my desk and office looks like a bomb went off with bird and mushroom guides scattered all over. Today it’s starting to look a little more cleaned up and in order, and I will be on to other projects soon.
Posted by The Rambler at 12:59:00 PM No comments: 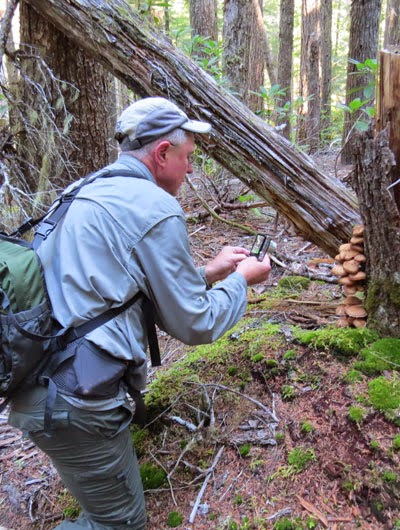 Fall is the time to enjoy mushrooms. Wildflowers are definitely past their prime, so it’s the season to appreciate mushrooms. Even if you don’t enjoy eating them, you can enjoy seeing them and admiring the colors, shapes and texture they bring to the forest floor. Kerry Kliever is shown here photographing some mushrooms along the trail on a hike to Pamelia Lake yesterday.  Click here to go to the Trip Journal for more on the hike. 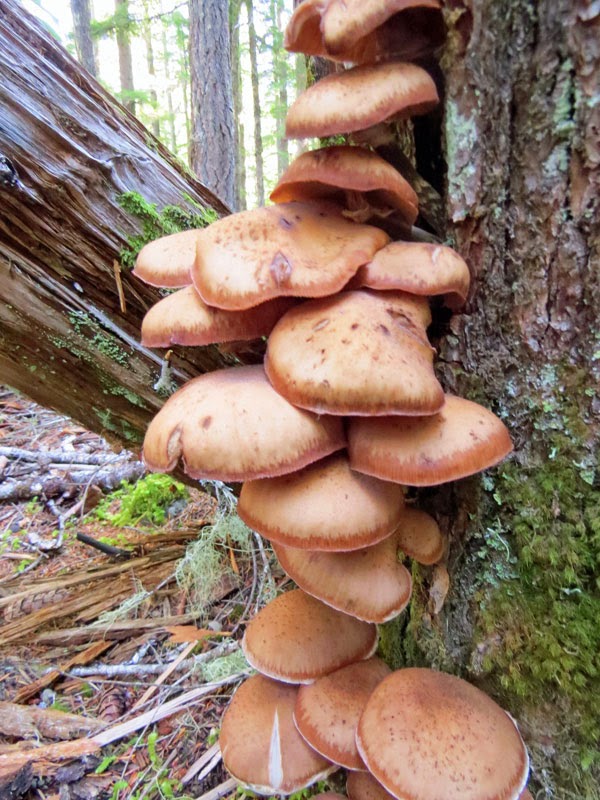 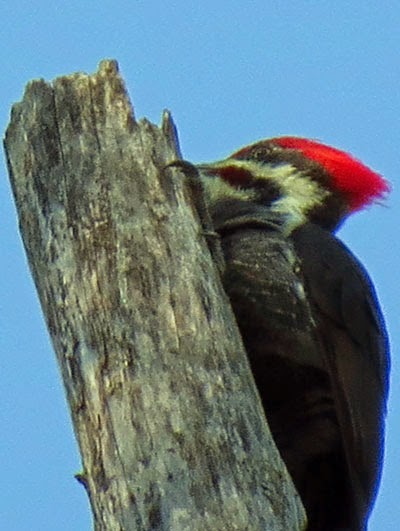 This Pileated Woodpecker was deep into drumming on this old snag this morning at Keizer Rapids City Park.  PileatedWoodpeckers are the largest woodpeckers in North America at almost a foot and a half in length, and with a wingspan of over two feet. When they pound away on an old snag they make a sound way beyond any other woodpecker.  Jeanette and I were excited to find and watch this magnificent bird, but Buster had other ideas, he wanted to get out of there.  It was hard for me to hold still to get a photo because he was jumping up on my leg insisting that we leave.  We already knew he was “gun shy” and frightened by guns, fireworks, and thunder, but this was the first experience of seeing him afraid of a bird.  Never mind that he had already barked and challenged several big dogs on the trail, this explosion of sound had him buffaloed.
Posted by The Rambler at 6:43:00 PM No comments: 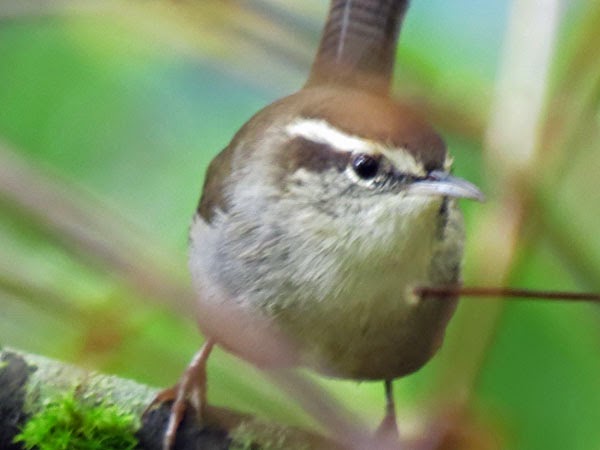 Yesterday morning I took a short walk on the trails at the Salem Audubon Nature Reserve. The woods had the feeling of fall, the air was damp and the forest quiet. Then the silence was punctuated with a beautiful bird song.  I tried to locate the songstress, moving closer step by step, thinking it might be a Bewick’s Wren, but it was flushed before I could get a close look. After a second attempt to locate the bird I traveled on, but stopped when I considered using my iPod to play a Bewick’s song.  I retraced my steps and clicked on the song, and almost immediately the cautious bird was overcome with curiosity and popped out to take a look at the source of this sound, indeed my bird was a Bewick’s Wren.
Posted by The Rambler at 7:06:00 AM 1 comment: