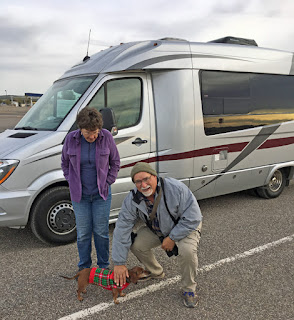 This morning we left Lake Havasu State Park.  After camping and birding with Glenn Reuben for over a week, first at Davis Camp County Park for five days, and then at Lake Havasu State Park for three days, we said a temporary good-by and are heading in two different directions.  We are continuing on down the Colorado River, stopping at three more Arizona State Parks, Cattail Cove, River Island and Buckskin Mountain.  Glenn is spending one more day at Lake Havasu State Park and then off to boondock for a few days at Craggy Walsh.  We are both pretty sure we will meet again this winter some place.

Our time at Lake Havasu has been colored by unusually cold and windy weather, so leaving sort brings hope for nicer weather.  The other adverse effect has been that Buster has been sick for the last day or two.  In addition to a lack of energy he has had constant trembling, a feeling of a fever, and occasional panting.  We were worried enough to contact an animal clinic, but at 650 dollars to check him, plus what ever else they would do, we decided to hold off for a bit. This morning he appears some better, and Jeanette dressed him in his Christmas sweater to say good-by to Glenn. We have dumped our tanks in the RV, taken on fresh water, and Jeanette is stocking up on groceries at Bashas' as I write.
Posted by The Rambler at 9:23:00 AM