Red-breasted Sapsucker
I go on a bird walk daily.  It may be at a city or county park, or even at a nearby refuge, but a majority of the time it is just within my local neighborhood here at Dallas Retirement Village. That may sound boring, because as you might suspect, I see some of the same species every time. But the hidden gem here is the astonishing amount of learning that is connected with this repetitive activity. I know before walking out the door I will hear and see some American Crows, Anna's Hummingbirds, California Scrub Jays, and European Starlings, just to name a few. But occasional I get a surprise, like a hawk, or an unusual sparrow, or, like today, a Red-breasted Sapsucker.  In fact, today, I saw two Red-breasted Sapsuckers! But, the real point of my post today is not about unusual birds, as it is about the value of birding every day. It inevitably leads to a greater understanding of birds in general, or in this case, some birds in particular. I have known for some time that Sapsuckers drill holes in the bark of trees to have access to sap. They then revisit these sap "wells" to slurp up the sap again and again. Insects are also interested in the sap, but sometimes get caught in the sticky sap which serve as an extra bonus for the sapsucker. On a recent bird walk my wife and I observed an Anna's Hummingbird visiting a sap well to harvest the sweet sap. Then yesterday on Jan 13th, we found two Red-breasted Sapsuckers on two different trees, and at both locations, a pair of Anna's Hummingbirds swirling around to sneak in for a serving of sap. Who knew that hummingbirds are dependent on sapsuckers for provisions? My conclusion is that there is much to learn with continual daily observations.

A Weekend Window of Sunshine

We have been watching the weather forecast everyday hoping for a couple of dry days in this seemingly endless pattern of rain. Finally, this week we noticed that Saturday and Sunday were predicted to be dry and warmer on the Oregon Coast.  We set our sights on a visit to the Oregon Dunes National Recreation Area, south of Florence, where our friend Glenn who is currently working as a volunteer at the Driftwood II Campground. It was a good decision, and we enjoyed bright sunshine and some great birding. 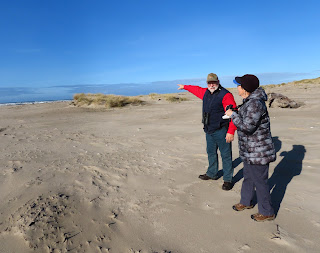 Glenn points out recent changes in the beach
We connected with Glenn on Saturday morning and immediately took off for a bird walk on the Siltcoos River estuary and beach. Major changes have occurred this winter with huge storms piling up sand, causing changes in the river's route, even to one point entirely blocking the river's access to the ocean. 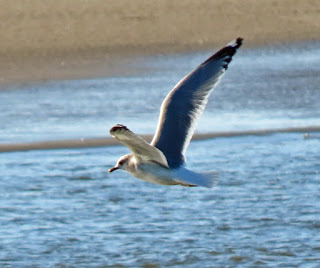 Bonaparte's Gull, as shown here, and lots of Western Gulls were busy at the mouth of the river feeding and bathing, until a Bald Eagle appeared, and they all scattered. 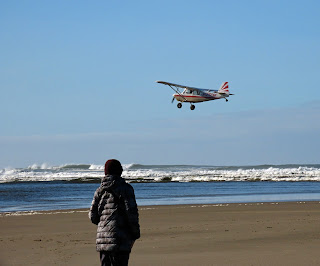 The wonderful weather brought out all kinds of sightseers, including this low flying airplane. 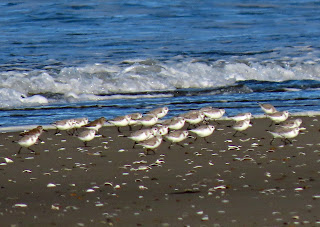 Over a hundred Sanderlings scurried along the waterline looking for little tidbits. You can see our observation list of the river and beach here. 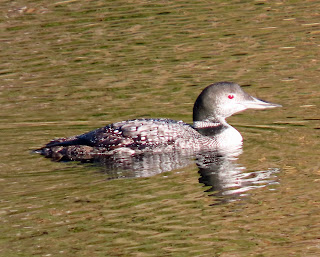 After lunch the three of us drove to Carter Lake for an afternoon bird walk. This Common Loon was a great find, in fact it was the first to be reported to e-Bird at this location as well a flock of Canada Jays that we also saw. You can see our observation list here. We concluded our day at Darling's Marina & RV Resort enjoying dinner and the sun setting across Siltcoos Lake. 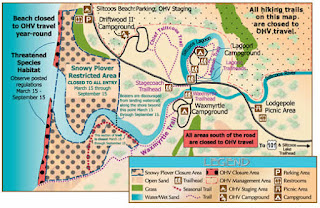 Both the Lagoon and Waxmyrtle Campgrounds are closed due to highwater flooding. Driftwood II Campground, where Glenn works, and stays is still open. Click on this map to get a closer look at the area.

We have enjoyed this area for many years, camping, birding, and volunteering in the Snowy Plover Protection Program.  In fact, we first met Glenn while camping here at Waxmytle Campground around five years ago. We have continued to share in adventures with Glenn, not only here, but throughout Oregon, California and Arizona. 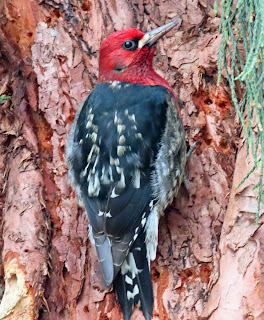 I was happy to find this Red-breasted Sapsucker this morning, back at his old tree here in the Dallas Retirement Village.  2021 has been a tough year for him as well as everyone else.  The landscape crew got carried away this year in trimming up this tree and exposed his hideaway where he could harvest the sap in secrecy. You see, Sapsuckers drill holes in trees not to find insects, but to access sap.  They then return to these "sap wells" again and again to harvest the sap. If a hapless insect gets stuck in the sap, so much the better for the Sapsucker. In the past I could count on stopping by and peering deep into the foliage to see him, or getting a glimpse of  him as he came and went to and from his hidden source of sap.  But for many months now, he has been missing. I'm sure he has felt his private world was destroyed. So, it really made my day to find that he was back. Perhaps he summoned up the courage to drill new holes for sap out in plane sight. I'm going to choose this as a good omen for the New Year, with hoping we all can manage to get back to our normal lives again.
Posted by The Rambler at 1:11:00 PM No comments: