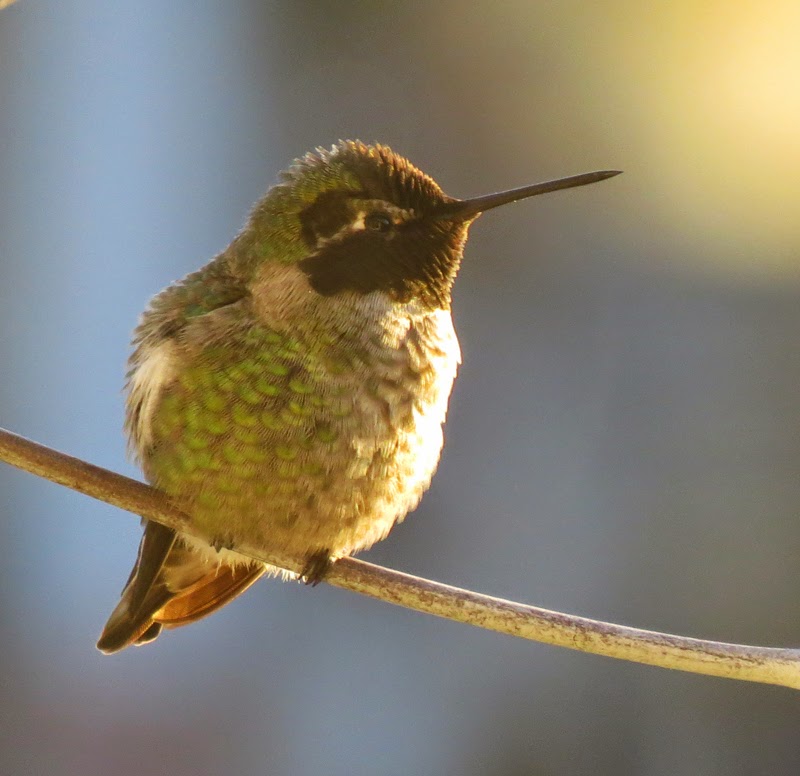 This male Anna’s Hummingbird sits outside our window this morning seeking some warmth from the morning sun. Jeanette has already taken outside the pre-warmed juice feeder and placed a bowl of warm water on the frozen surface of the birdbath. As this little bird sits all plumped up seeking to stay warm he serves as an important reminder that we need to continue to care for birds during the current cold snap that we are experiencing where temperatures are dipping down into the 20’s.  Lots of people take down their hummingbird nectar feeders in the wintertime thinking the hummers have gone south, and some have like the Rufous Hummingbird, but the Anna’s like this little guy live here in the Northwest year-around so its important to continue feeding.  Not only is it important to continue putting out juice for the hummers, but its important to continue to keep feeding seeds and suet for the others, and make sure there is liquid water available because birdbaths are freezing over during this cold spell.  Jeanette religiously makes several trips daily to the birdbath to break the ice, or add hot water. Of course all this attention to our birds gives us lots of enjoyment in watching them, but even more important it is necessary for their survival. 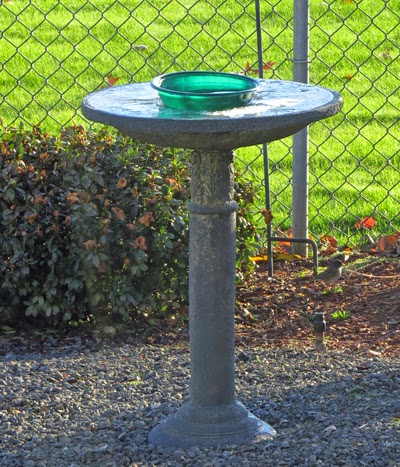 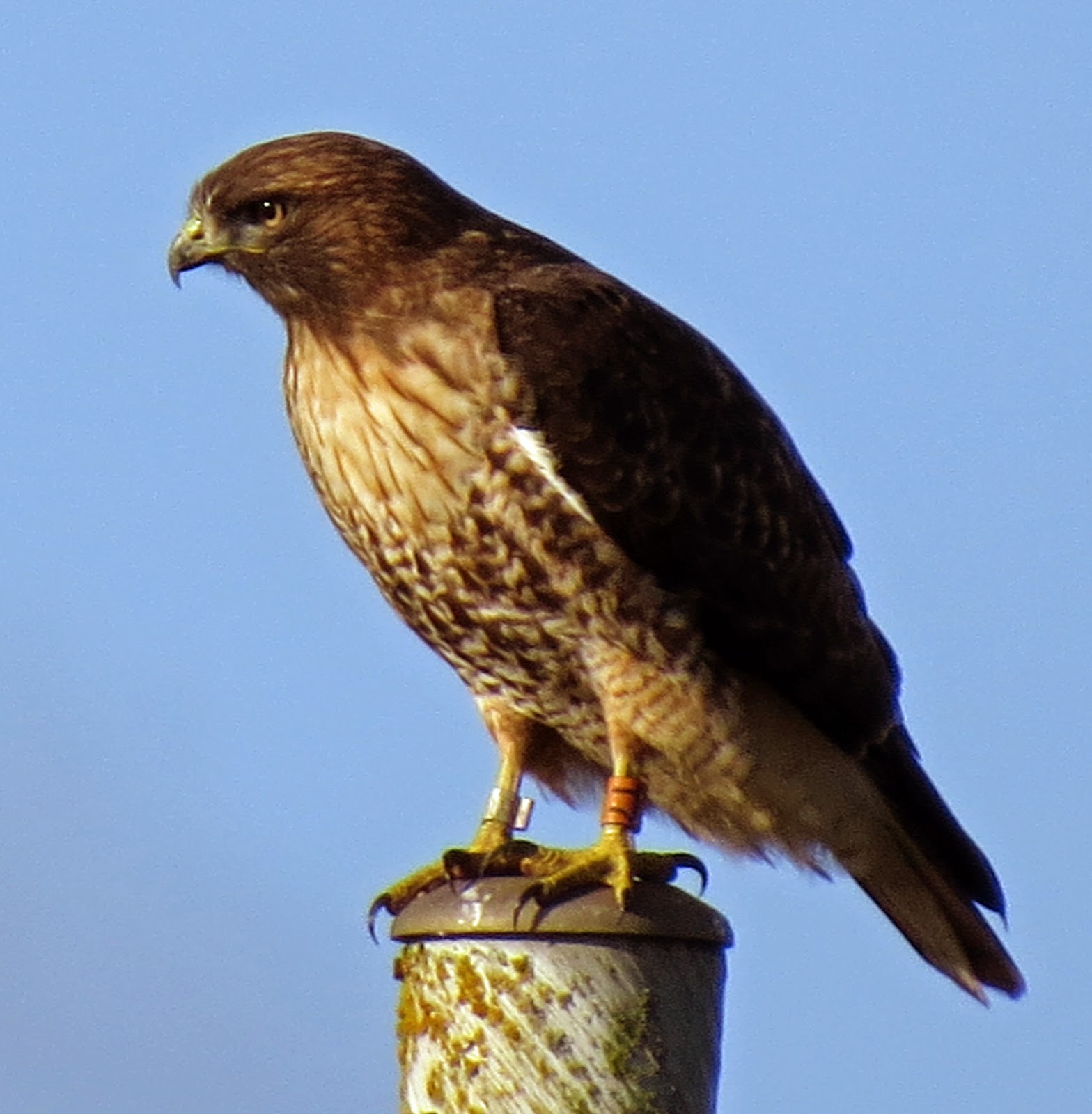 We have seen this same Red-tail Hawk the last two times we have been birding at Fairview Wetlands in South Salem. The orange band on the left hand leg identifies it as number “T7”, and I have learned some interesting things about this Red-tail.  The Portland International Airport in their wildlife management program uses this particular orange plastic band. They tag these birds and relocate them to other sites.  In this case this bird was captured as a juvenile last year and released at Ankeny National Wildlife Refuge. It has been seen for the last two winters now at Fairview Wetlands where it seems to be living and hunting successfully. 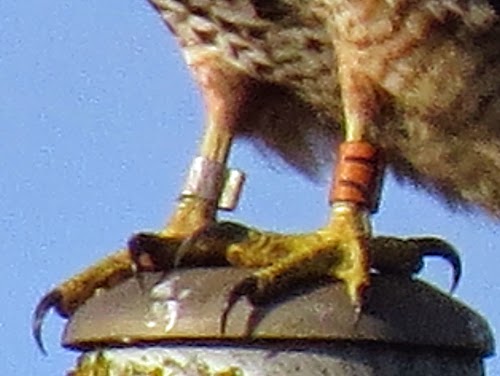 Below is a photo showing the Red-tail tearing about a mouse or vole we watched it capture and take to this bat house to eat. 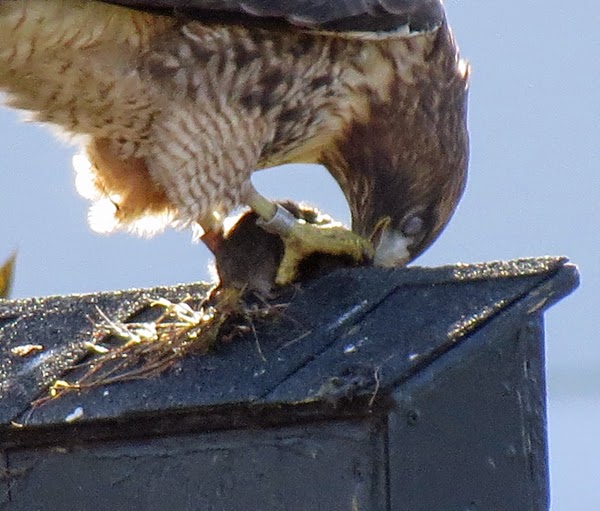 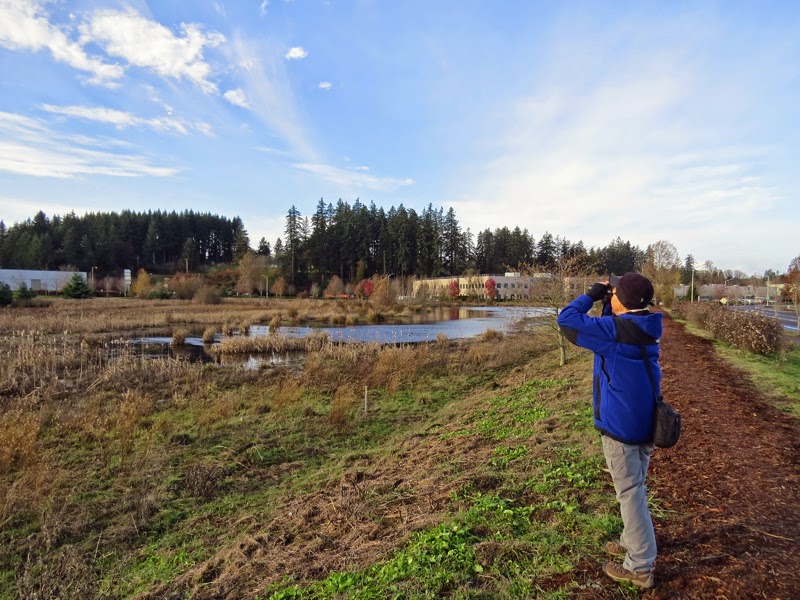 Jeanette is shown here during our birding trip to Fairview Wetlands this morning.  We sort of have an unwritten commitment to make sure that our daily schedule includes some exercise and fresh air.  Jeanette calls it her “fresh air therapy”.  A few years ago while visiting my mom when she was still able to talk a little, I was telling her how we always take Buster for a walk everyday because its good for him.  To our surprise she spoke up an said, “Its good for you and Jeanette too”.  She was right, it is good for us, and although we have both incorporated daily exercise into our schedule for years, even before we met, it seems even more critical to our physical and mental well being now as we age. Winter hours, and weather constrict our options this time of year, but this is where the commitment comes into place, and we make sure it is still part of our daily schedule.
Posted by The Rambler at 12:39:00 PM No comments: 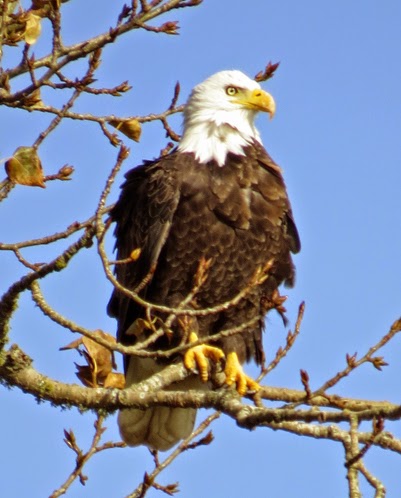 There was a time when sighting a Bald Eagle was pretty rare, but now thanks to their recovery they are a pretty common sight.  Adding to my “ho-hum” attitude is the fact that this late in the year it is pretty hard to come up with a new and exciting bird to add to the list for the year. By this time you have pretty much seen all the different species your going to see for this year. Checking on my observations reported to e-Bird.org, I can see that I have counted almost fifty Bald Eagles so far. But, come January 1st every new bird will be special.

This Bald Eagle was photographed today during a tour led by ODFW to Hayden Island along the Willamette River in Polk County. 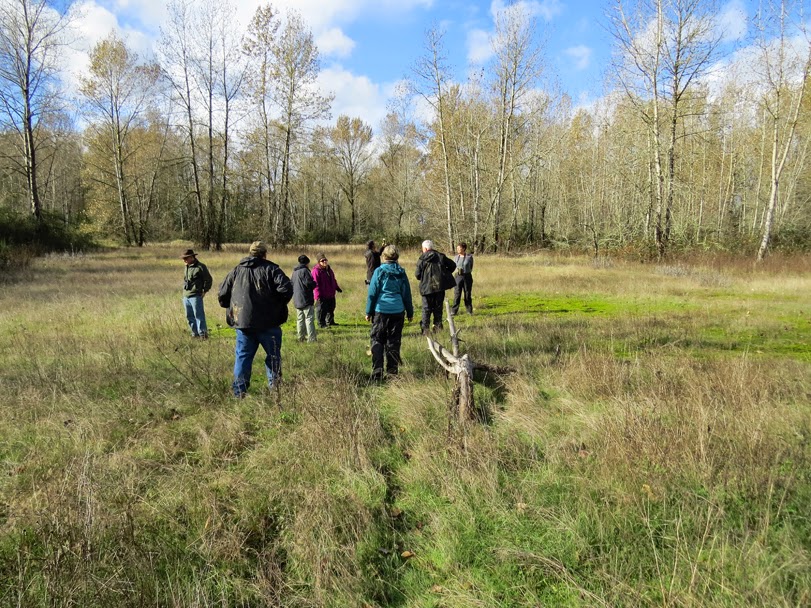 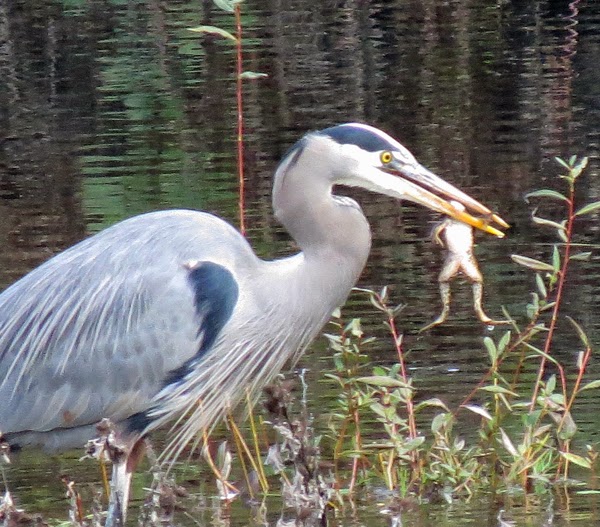 We spotted this Great Blue Heron eating a Bullfrog while birding at Wallace Marine Park in West Salem yesterday.  Bullfrogs are tagged as an invasive species. Here is a quote from the Oregon Department of Fish and Wildlife.


So, --- I applaud Mr. Great Blue Heron for his volunteer efforts to remove invasive species from our waterways.
Posted by The Rambler at 6:05:00 AM No comments: