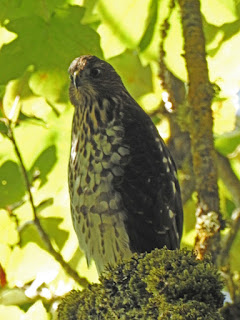 Today we had a lot of things going on, so we squeezed in a short mid-morning walk for Buster and to make a quick bird list.  For convenience we went to nearby Wallace Marine Park.  Our normal route for walking around the ball fields looked a little congested so we elected to take a different route next to the river that we could make into a short loop.  Midway through the loop we spotted a large bird fly into a tight mix of cottonwood and big-leaf maple trees.  Looking with our binoculars we thought it was an immature Cooper's Hawk, it was for sure too big to be a Sharp-shinned Hawk. Just to be on the safe side I quickly took some photos so that I could get a closer look. When I got home and down loaded the photos into my laptop, I started to check some birding guides to confirm that our bird was a Cooper's Hawk, to my great surprise I began to realize we had a juvenile Northern Goshawk.  Neither Jeanette nor I had ever seen a Northern Goshawk before, so a new bird for Cascade Ramblings and a new Life Bird!  Further research revealed that this species is normally found in the high Cascades, and when seen here in the valley, it is usually in winter.  I'm guessing with the all the wildfires and smoke problems in the Cascades that it has fled here to the valley for better conditions.  Goshawks are bigger than a Cooper's Hawk or a Red-tailed Hawk, in fact they are only surpassed in size in the hawk group by Golden and Bald Eagles.  This fits with our first impression of a big bird.  Here is our eBird checklist.
Posted by The Rambler at 6:47:00 PM 1 comment: 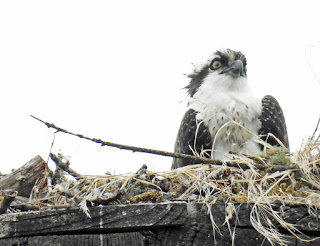 Tomorrow is the last day of August! Where has the time gone?  I noticed yesterday that I had written only one blog this month, and for the last two months I have only posted three per month.  What has happened?  This is from a blogger who, for example, did 20 posts for the month of August in 2010. It could be blamed on aging, my brain is now past three quarters of a century old. But the other reality is I am busier posting to Facebook and eBird than I was in 2010. I had joined Facebook in 2008, but I'm sure I didn't post much.  Now, in addition to my own FB page, I manage two other additional pages, Salem Audubon Nature Reserve, and Salemtowne Birders.  I didn't join eBird until 2011 and and at that time I probably tried to put up a bird list once a week.  Now I post to eBird at least once every day, and also try to add to the new feature of photos.  Bottom line I'm spending a lot of my time on other media in place of my blog.

This photo is of a lone juvenile at the Salem Audubon Nature Reserve. I saw it today take a practice loop to a tree,  abort a poor attempt at landing on a limb, and have to circle back to the nest. This is the last juvenile of three to leave this season's nest, and I was struck by where has the time gone.  It has been a fascinating year to watch the Osprey, from the arrival of the parents this spring, their courtship and nest building, the birth of the chicks, the effort of the mom and the dad to feed and protect them, and now only one juvenile is left, and it too will soon be heading south.  Where has the time gone?  Well it rolls on day by day, month after month, season upon season and year after year.
Posted by The Rambler at 2:21:00 PM 3 comments: 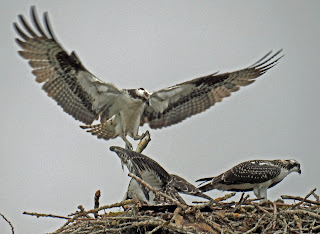 It's easy to notice in this photo an Osprey bringing a fish to the nest, but there are many layers to the story of what is actually going on here.  The photo was taken today at Wallace Marine Park during a standard route we take that circles the soft-ball complex.  When we first started we spotted a juvenile sitting on a light pole, and then found another juvenile on the nest which is built on top of a large cluster of lights. We noticed an Osprey fly in and possibly leave a fish in the nest.  This happened a second time as we cicled the playing fields, and the bird on the nest seemed to be eating the fish.  As we were about to complete our circle,  some crying from the juveniles allerted us to a possible feeding coming up.  The juvenile off of the nest flew to the nest, and then a third Osprey which had been sitting on a nearby power pole flew to the nest at which time I got this photo.  This is the dad with the fish, and it appeared that he waited on purpose until both juveniles were on the nest to bring in the fish.  The juveniles have fledged and are able to fly, but dad at this point is still bringing them fish to eat. Hunting for their own fish is the next skill they will have to learn in the next few weeks before taking off for probably Central America for the winter.
Posted by The Rambler at 3:07:00 PM 2 comments: