Since Novermber I have been submitting a "Bird of the Month" to the Dallas Retirement Village Facebook page.  For the month of March the featured bird was the Osprey, noting their return from South America to the Willamette Valley to breed and raise their young.  Yesterday a reader of the post suggested I check out South Main Street at the old mill site. Jeanette and I drove out there this morning and indeed found an Osprey nest with a bird on the nest.  Checking on it from several viewing points in an attempt to get a better photo we realized there were actually two birds at the site, probably the female on the nest, and preening down below was probably the male.  This is the location of the former Willamette Industries mill, later bought out by Weyehaeuser Company, and now a fenced-in desolate post industrial site. Amazingly, the Osprey seem to be doing well on this abandoned power pole. 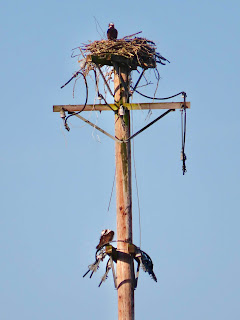