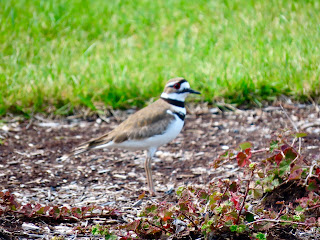 My sister Susan called the other day to report a Killdeer nest she and a friend had found while walking in a park.  Jeanette and I and Buster went in search of it yesterday afternoon. Killdeer are rather unique in their behavior of calling to get your attention, and even faking injury, in order to draw you away from their nest which is made right on the ground. 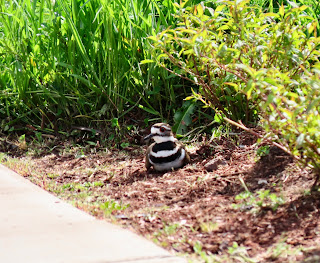 In this photo the Killdeer was trying to draw our attention by appearing to be settling down in plain view in a fake nest. However the real nest was located  in the opposite direction. 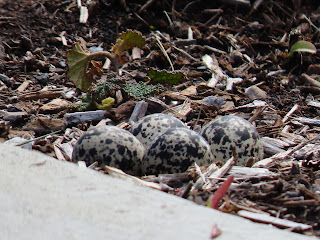 Here is the real nest, taken with my camera zoomed from a distance, with four camouflage colored eggs.  Killdeer don't build a nest in the traditional sense of sticks and grass and feathers, but merely scoop out a depression, in this case bark dust, but many  times gravel.  I have purposely not mentioned the nest location in order to not attract any more attention to the nest site to hopefully help in its success.
Posted by The Rambler at 9:04:00 AM