I arrived here at the Dallas Retirement Village the first part of January with a half dozen bird nestinging boxes, an armload of support poles, and years of successful bird nesting experience.  I first sought permission to put up a box in the garden area in hopes of attacting swallows with a box specifically build for them, yet keep out House Sparrows.  After a couple of weeks the first birds to show an interest were a pair of Western Bluebirds.  Down came the custom swallow box and up went a box with a large enough entrance hole to accommodate bluebirds.  Weeks went on with them coming and going, some competition with House Sparrows, and now a month later or more and no sign of the bluebirds.  My next bright idea was to put up a nesting box on our second floor balcony, and because I had seen some Violet-green Swallows circling the central courtyard, I put up the special swallow box.  Nothing.  The third location I came up with a month ago was at the end of the parking garage overlooking a water collection basin.  I had one more swallow box, so I put that up. It's been written up in our newsletter, people wanting to know what it was and who put it there.  The Executive Director supported me, but again no birds showed any interest.  And then suddenly today there were a half dozen swallows cirlcing this third nesting box.  Of course I had no carmera with me.  Later, with camera in hand I got a photo of this Tree Swallow taking a look inside the box.  I have my fingers crossed that I get a nesting pair here.  My reputation is in bad need of some supporting evidence of my bird house knowledge. 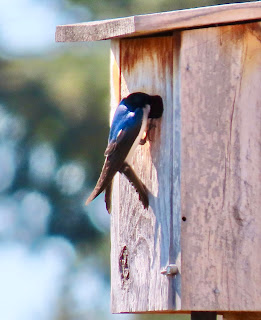