Future Ramblings in a Cascade Camper

Yesterday we were thrilled to meet with Ilsa Chapple of Cascade Campers at the I-5 Santiam Rest Area while she was in route from Washington to California.  It was our first opportunity to actually look at the camper build-out we are having her company build for us. Cascade Campers is based in Grass Valley California, and we are scheduled to have them convert a 2017 Ram Promaster City SLT Van to a camper some time in July. 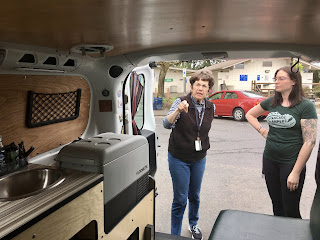 Jeanette is discusing with Ilsa the 12volt compressor refrigerator which runs off a battery charged by a 100 watt solar panel located on the roof. Other ammenities include a sink with running water from a 5 gallon removable water tank, and a butane stove for cooking 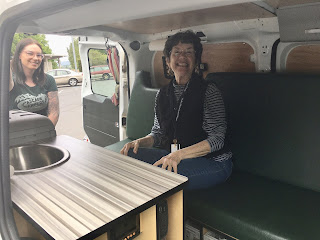 Jeanette trys out the comfortable couch, which folds down to make a bed. Underneath the couch are five containers for storage. Cooking can be done on the counter space shown with a butane stove that is included. 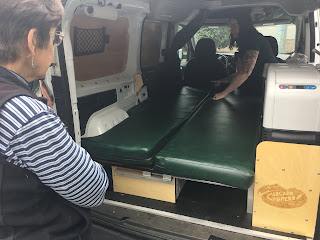 Jeanette watches while Ilsa demonstrates making the couch into the bed.

For the past several months we have been investigating a number of camper vans; the CarAvan Freebird, the Wilderness Vans West Coast Mini, and the Recon Camper Envy are the main ones that come to mind.  In the end the best fit for us was Cascade Campers. They are the only one that build with a length-wise couch, and seem to have the best thought out design and most practical. And they were also the least expensive.  The camper is very basic and simple and our dream is that it will be the perfect vehicle for us to escape to the coast or mountains for a night or two.