Changes in the Bird World 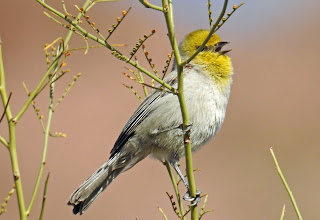 We have been here at Cattail Cove State Park for just under a month now, and we are starting to notice changes going on in the bird world.  When we got here there were large rafts of ducks in our cove on Lake Havasu.  I just realized yesterday that has changed, the migrating water fowl have evidently moved on south, we now have only a hand full of a few ducks.  American Coots are down from over 200 to around 50.  Offsetting that down turn, is the changes going on with the non migrating birds.  Pairs of humming birds and gnatcatchers where chasing each other in the Cactus Garden where I was doing a stationary count, the list can be seen here, and this is where I got the above photo of a singing male Verdin close to a nesting sight.  Every morning now the Say's Phoebe are singing in the wash behind our campsite and in several locations in the campground.  Nightly we hear a pair of Great Horned Owls hooting in the canyon where we are camped. The next few weeks should be interesting as nest building gets underway. 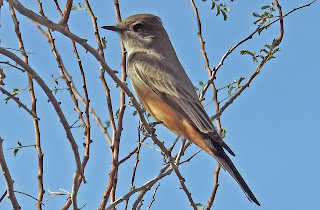