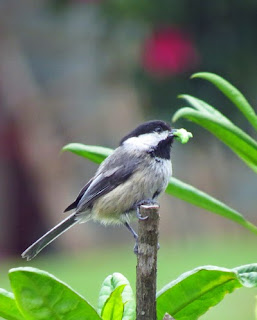 The timid Black-capped Chickadee continued to return several times yesterday with a green larva, perhaps not really understanding, or hoping that a helpless dead baby would magically revive.  I removed the dead body for sanitation, discouragement to the Sparrow, and in hopes the Chickadees would try again.  From what I have read they only have one brood a year, so that may be it.  I also installed a restrictive collar at the bird house entrance, which seems to have upset the House Sparrow. 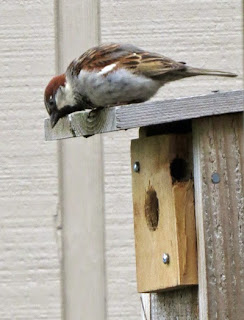 I worry about the other two nesting boxes with Swallows, but so far the Swallows seen to refuse to allow the Sparrow around.  They are a little larger than the Chickadees, and are more aggressive in their defense by blocking the entrance with their body and attacking the Sparrow. We leave in two days for a three and a half month volunteer position on the coast so we may never know the outcome.
Posted by The Rambler at 6:08:00 AM