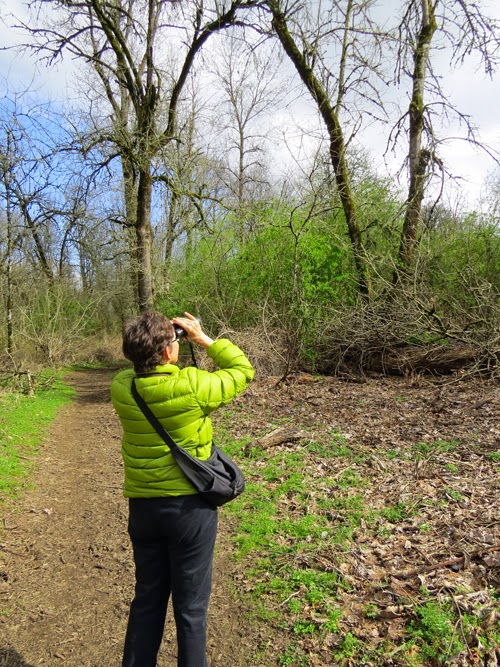 Jeanette is shown here here yesterday watching a Steller's Jay, the culprit in tricking us into thinking we had heard our first Osprey of the season. We were quite excited to possibly have an Osprey as they do not normally arrive until around the first of April. It took us five or ten minutes to discover that the source of the "Osprey" call was coming from a Steller's Jay. Steller's Jays are well known for their imitation of Red-tailed Hawks, and we hear them quite often.  In fact I have become so used to their tricks I almost didn't see a Red-tailed Hawk this winter while in California in a nearby tree. I was ready to dismiss the call as a Steller's Jay. Yesterday while birding at Willamette Mission State Park, we counted 17 Steller's Jays, and there were probably more, I think I just got tied of trying to keep track.  They were up to their old tricks and we heard several poor imitations of Red-tailed Hawks and many many more of their own normal harsh calls.  You can see our list of birds from yesterdays trip by clicking here. Another high-light of our day was watching a pair of cavorting American Kestrels, --- they were the real thing.
Posted by The Rambler at 9:13:00 AM