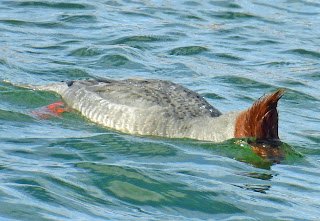 I've learned so much this winter while leading bird walks at Cattail Cove State Park, some things just from daily observations, some things from research, and some things from participants on the bird walk.  This piece of new knowledge came from a participant a few weeks ago.  We were watching a couple of Common Merganser females swimming along the surface of the water with their head partially under water like this photo I took today.  I hadn't given it much thought, but the participant asked if the duck was possibly looking for fish.  The light went on, of course!  As you may notice her head is just under the surface to the point of allowing the eye to see under water. 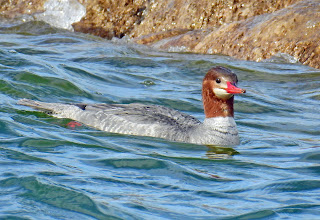 This photo is taken of the same bird, a mere 10 seconds later after an unsuccessful dive.  I now have a new understanding and appreciation for the times I see this behavior.
Posted by The Rambler at 3:32:00 PM