Return of the Osprey 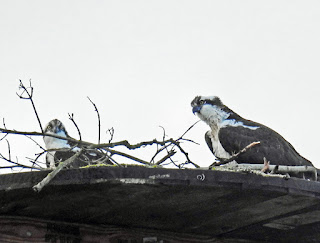 The Osprey have made their annual return to the West Salem area.  I was made aware of their presence on Thusday by email and photos that my neighbor Lou Nelson sent me. She happens to drive by the nesting site on Murlark Avenue several times a week, and Thursday March 23rd was her first sighting of this season.  Last year Jeanette saw them for the first time on March 20th, and the year before I noticed them on March 25th.

I went by the nest site this morning and took this photo.  I was lucky enough to be there at the time the male brought in a stick to the platform.  When I first got there the female, which is the larger one on the right, was alone on the nest and crying out loudly.  Suddenly the male, which is the smaller one on the left, appeared and flew down to the nest with a large stick.  If you look closely at the photo (clicking on the image will enlarge it) you can see the stick that is on the top, and also notice the scrutiny in the look of the female.  This is a ritual they will preform many times in this next week or so as they build an acceptable crude network of sticks for their nest.

I checked out all six nesting sites that I keep track of in West Salem this morning.  Of the six, three where occupied, but only the one on Murlark is to the building stage.
Posted by The Rambler at 1:02:00 PM