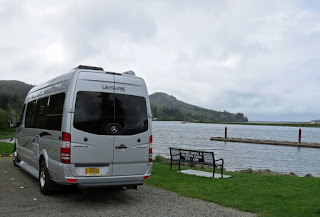 We are currently on another trip to the coast for a training session tomorrow at Nehalem Bay State Park for the Plover Patrol.  We spent today traveling, stopping to bird at several locations.  Our Free Spirt van is shown here overlooking Nehalem Bay in the tiny town of Wheeler.  We are parked in the Wheeler Wildlife Viewing Area, which resembles more of a city park.  It's very nicely landscaped with plants, paths, picnic tables, benches, and a small parking lot that will hold less then ten cars. We discovered, kind of by defalt, the value of using the van as a birding blind.  We had originally gotten out of the van and walked the paths and scanned the bay for birds, coming up rather short with 3 House Sparrows and a Crow.  The weather turned threatening and started to sprinkle, so we got back in the van, and then the birds started appearing.  First a couple of Least Sandpipers appeared at the waters endge which grew to a total of 31 busy little birds.  A couple of Pelagic Cormmants started fishing. I set up a scope on a table mount tripod on the gally counter to get better looks at 8 Common Mergansers on the far side, plus a couple of nesting Canada Geese. Before we knew it we had 15 different species on our list.  I'm convinced the secret was that we were invisible to the birds behind the darkened glass in the van.   We were warm and dry in the van and possed no threat to the birds coming and going.  We look forward to repeating this scene again for sure, using the van as a birding blind. 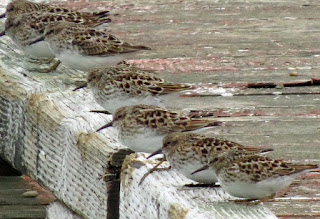 Least Sandpipers
Posted by The Rambler at 4:16:00 PM