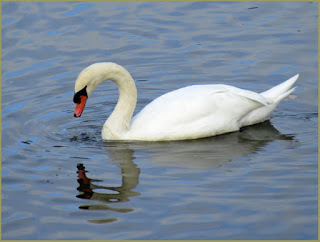 This morning while birding at Wallace Marine Park in West Salem a walker stopped to tell us he thought he had just seen Swans in Salem's Riverfront Park.  We finished up our observation list at Wallace and went in search, hoping he wasn't confused with perhaps Great Egrets.  We found two swans, which turned out to be Mute Swans not the Tundra Swans we were hoping for.  These may possibly be the two we found last year at Stone Quarry Lake by the airport. Those were considered to be released pets and not countable on eBird.  Mute Swans are not native to North America.  The thing is, last winter we found Mute Swans in Anderson California, see blog post here, and they are an accepted species there I think because their numbers are large enough. I guess these bear watching to see if there are any more. Maybe with Global Warming the California birds will eventually find their way north to Oregon.