Yesterday afternoon we experienced the advantages of what I will call a "bird sit" as apposed to a "bird walk". Actually, in the birding world this is known as a stationary count. So what we did was sit in our lawn chairs in the Dallas City Park and counted the birds we could hear or see from that location. We had had a busy morning, and just needed to sit and rest, which we could justify by doing a stationary bird count. The amazing think is that we learned some things we probably would not have learned while moving along on a bird walk.  Sitting stationary for some time I noticed an Acorn Woodpecker high on a perch. As a watched I realized it was leaving the perch and returning repeatedly, and I came to conclude that it was leaving the perch to catch an insect, and then returning, and then repeating. In birding terms this is knows a "hawking". I observed this action for some time and then it left the perch going lower down the tree and as I later learned from studying the photos, was there to harvest sap oozing out of the previously drilled holes. The harvesting of sap we learned about the day before, but catching insects was a new insight in their behavior. 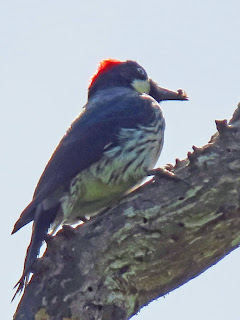 Back with a bug 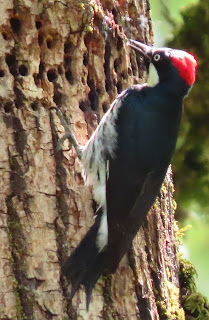 Down to the sap wells 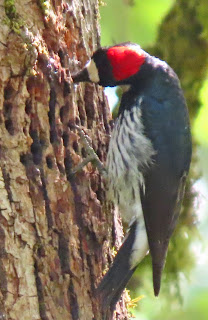 Harvesting sap
Posted by The Rambler at 3:14:00 PM