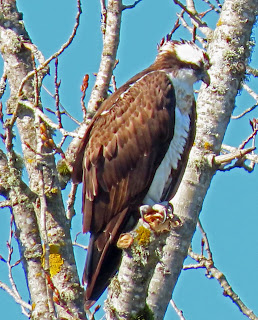 FOY, or "First of the Year" bird sightings, are a big deal for many birders.  Jeanette and I have a particular obsession for FOY Osprey.  They are special in part because they migrate, leaving in the Fall to spend the Winter in Mexico and further south, and then they return in the Spring. Normally they return to the same nest site around the middle of March.  It's always an exciting moment when we discover them because it heralds in a season of activity with pair interaction, nest building, and chick raising. Because of their size they are an easy bird to keep track of.

Yesterday while walking in our neighborhood at Dallas Retirement Village, one of the residents stopped to tell us that they had seen an Osprey with a fish on Rickreall Creek the morning before. This was big news for us because we had been watching nest sites for the past three weeks hoping to catch our FOY sighting. We abruptly ended our bird walk and drove to the Aquatics Center to walk the area of the Rickreall Creek Trail System where the Osprey was seen.  We came up empty handed, but as we were returning to the car, another couple stopped to ask if we had seen the Osprey near the foot bridge next to the dog park.  We were off on a fast walk, and sure enough Jeanette spotted this Osprey and I took some photos.  This is not only our FOY Osprey, but possible the FOY Osprey for the greater area of Polk, Yamhill, and Marion Counties.