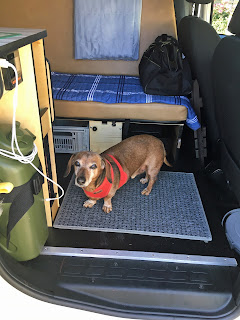 Jeanette and I already camped three nights in Casper our Cascade Campers van while bringing it home to Dallas Oregon from Grass Valley California. However, the travel anxiety ridden Buster had not camped in it yet, as he waited out his time at the Oak Grove Kennel in Monmouth.  Thus the motive for a one-night to the coast that we took on Monday. 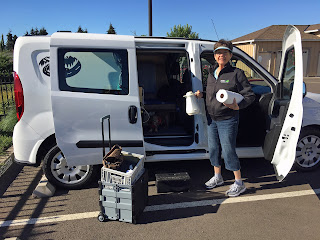 We packed up Casper with some essentials, like coffee and paper towels. Plus extra clothes, and food items.  Small storage space automatically shortens packing time, so in sort order we were ready. 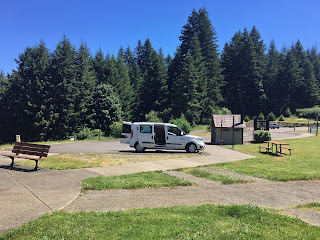 Although I didn't get a photo, our first stop was at Buell County Park for a break for Buster.  This is always a great stop for birding, see list here, and the shady trees and clear running Mill Creek combine for a travel oasis and a reduction in stress. Restrooms where open, import to note in this time of Covid-19. Our next stop for Buster was at Fort Yamhill State Heritage Area for lunch, which is the photo shown above.  We did a stationary bird count here from our picnic table. Restrooms were also open here. 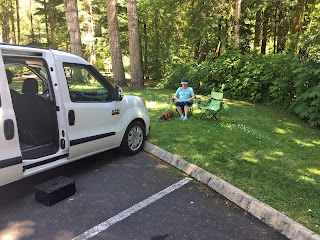 Our third stop was at Van Duzer Rest Area, and yes the restrooms where open.  We picked a shady spot to park and get out our new handy folding chairs which Jeanette and scored on at a sale at Fred Myers last week for nine dollars a piece. You can see our bird list here. Our next stop in Lincoln City was the Connie Hansen Garden Conservancy, which I failed to photograph, but Buster and I enjoyed a little exploratory stroll and bird count while Jeanette stretched out on the couch in the van for a rest. No restrooms here so we continued south on Highway 101 and made a stop at a public parking lot with restrooms, a new important necessity for our small bath-room-less van. Moe's was our next destination for some take-out fish and chips which we ate in the van. We traveled on south as I wanted to check on Boiler Bay State Rest Area.  It's important in these changing times of Covid-19 to verify open status. It was closed, and the entrance was barricaded, so hopes of parking vanished and it became our turn around point. 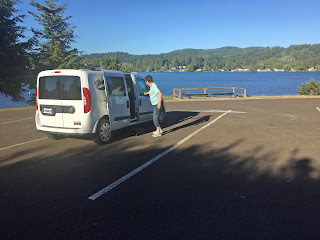 Holmes Road Park with a nice view of Devils Lake became our compromise for an overnight spot.  I got in another bird list here, while we waited for the temperature to cool for the evening.  At 12:30 AM we had a knock on the door from the Lincoln City Police to explain there is no overnight camping allowed on the streets or parks of Lincoln City.  Oh, I say, I didn't realize, as we have parked here overnight on several occasions.  Well, we don't have enough staff to cover all the areas, he replied,  but it's been the law for 10 years. I dressed, drove the dark deserted streets in search of the Chinook Casino parking lots. 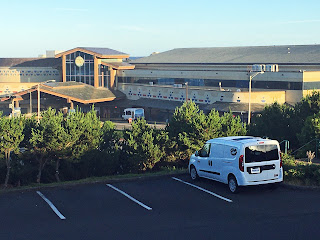 The morning sun lit up the Chinook Winds Casino from our parking spot.  It was a quiet remainder of the night here. After coffee and hot oatmeal we drove to the Dollar Tree for some shopping for van related items. 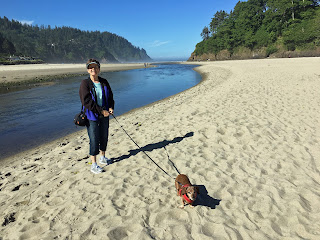 From Lincoln City we drove north over Cascade Head to Neskowin for some beach time for Buster. Click here for our bird observation list. 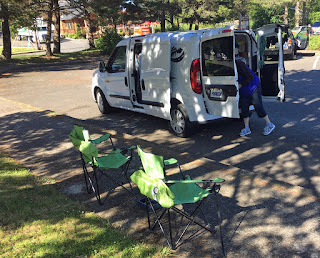 I specifically wanted to check out the Neskowin Beach State Recreation Site to see if it was open.  The ODOT site of Trip Check shows it closed, but the Oregon State Parks site showed it open.  It was indeed open, even the restrooms, and we enjoyed some time in the shade. Jeanette went to the store to pick up a sandwich for lunch at our next stop at Knight County Park on the Salmon River Estuary, where we found the restrooms open.  I failed to get a photo while at Knight Park, I guess in part because we were so busy.  We were enjoying the view, counting birds, and eating lunch, when a man by the name of Marshall approached us politely at a distance and asked if he could see our van.  He had a lot of questions and left determined to order one for himself. Buster had already chosen while we were first starting lunch, that he would rather be in the van, and had went back, jumped up into the van and settled himself on the couch.  At this point, I think we had our answer, we could travel with Buster.  The day had started to warm up, the mosquitoes we taking advantage of Jeanette, and Buster was asleep on the couch, so it made sense to drive home, secure in the knowledge that we can travel in this uncertain time of Covid-19 in our Cascade Campers van, and with our aging Buster dog.