Rescue of our Cascade Camper

I previously posted in May about our purchase of a custom built Cascade Campers van. As time went on Cascade Campers were able to move us up from a scheduled build date in mid July to the first week of June.  By June 9th they delivered the completed van to Pioneer Motors in Grass Valley.  Our plan had been to have the van transported to us in Dallas to avoid having to travel down and back to pick it up ourselves.  But after a week went by with no availability of a transport and prices starting to escalate, we made the decision Monday night, after locating a kennel for Buster, to drive down ourselves and pick-up the van.  The result was that we made a 10 hour drive straight to Grass Valley the next day. 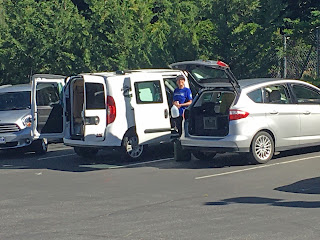 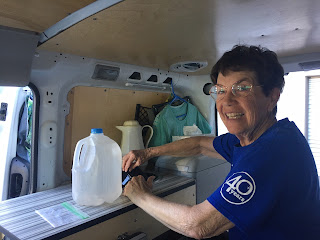 Jeanette is shown in these two photos on Tuesday afternoon transferring water, food and clothing to the van, and getting the kitchen set up in  the parking lot of Pioneer Motors, who allowed us to spend the night. The lot was gated at night and protected with security cameras. (a private conversation could reveal our night time experience).  As the sun went down the electrical system in the van started to fail. Calls to Cascade Campers resulted in the owner, Zach Yeager, coming in the morning at 8:00 to figure out the problem. 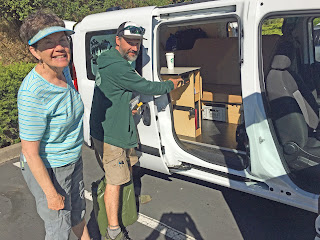 In this photo Zach is explaining the electrical system to Jeanette.  In the end, the battery breaker had not been switched on during the build.  The refrigerator and the electrical system had just been working off of the solar panel the day before, which is fine as long as there is sunshine, but once the sun went down, because the battery was not connected, we had no power. 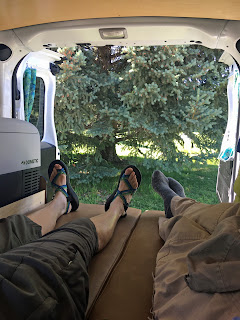 Wednesday morning it was necessary for us to drive out of state, (another private conversation could reveal the reason), to Reno Nevada. After driving over Donner Pass and completing business we were pretty frazzled, so we found Rancho San Rafael Regional Park, parked in the shade, opened up the rear doors, listened to the sounds of birds and a babbling brook,  relaxed, and then took a walk and made a bird list which you can see here. 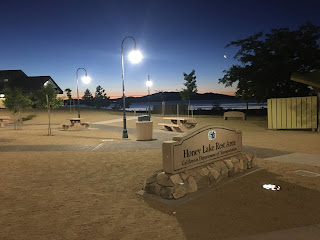 After gaining our composure, we headed out of town, passing on overnight parking at a Casino because of the heat, and drove on north.  We selected Honey Lake Rest Stop in California for an overnight parking spot, and it worked out perfectly.  Nice clean restrooms and lots of birds, you can see our bird list here, made for a perfect stop. 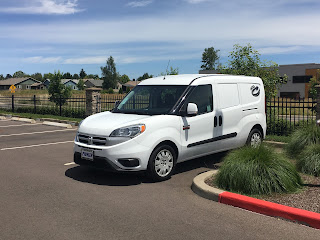 Home at last on Friday morning at Dallas Retirement Village, reserved parking space #8. Casper, as all Cascade Campers vans have names, will be ready to roll on a moments notice to take us away to secret locations on the Oregon Coast or the Cascade Mountains, or even nearby birding locations.