Camping at Lake of the Woods 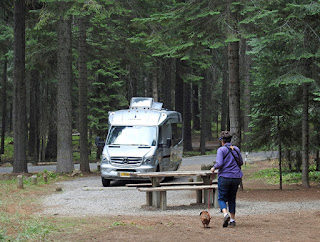 Here is our campsite, #2 in the Aspen Point Campground at Lake of the Woods.  We made a stop up here for two nights on our way from the wedding at Collier Memorial State Park to Henderson Line-Up in Grants Pass. (We had an appointment at Henderson's to install rear Koni shocks on the Serenity, which by the way we are really impressed with the improvement.) This camping in the tree forest was our first opportunity to test out our new solar system.  With the hot weather, having shade was a necessity, but possibly a problem for the solar system. We found that even in shade some electricity is still being generated and with careful use we still had all the electricity we needed to keep laptops and phones charged. We made the big plunge to install solar this summer, in an effort to give us more days of dry camping without the dependency of being hooked up to electricity.  The experts on solar here in Oregon are AM Solar in Springfield, but they were not able to work us into their busy schedule until December. We wanted to be in Arizona by then so that was a no go.  Fortunately they have trained certified installers that they could recommend and we connected with Scott Harris of Urgent Care RV Repair & Solar, a mobile installer, who spends his summers in Newport.  He was able to install a solar system for us on August 16th.  We have not been connect to shore power at home since then, which in two more days will be a month! We loved our time at Lake of the Woods, even with some smoke in the air, the cooler temps were welcomed. 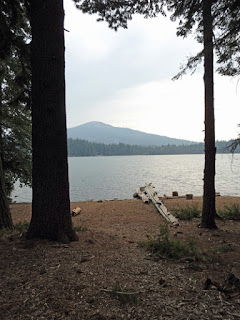 Rainbow Bay with Brown Mountain in the background
Posted by The Rambler at 9:14:00 AM