This is a story of Osprey success!  For background you need to know that this Osprey season of 2020-21 has been a very difficult one. For the second year in a row the Osprey nest in Independence at the Riverview Park failed. This is a closely watched nest site because there is a live camera mounted there and it is watched by a wide audience. Last year the male just disappeared, and the female stopped setting on the eggs.  This year she had two new suiters, but she eventually seemed to give up on them and abandoned the nest.  Another nest site is located at 9th and Patterson in West Salem, also with a live cam, but the extreme triple digit heat in June killed the three juveniles. So this morning, June 12, I was very pleased to find three large juveniles on the nest site in West Salem on Murlark Ave. 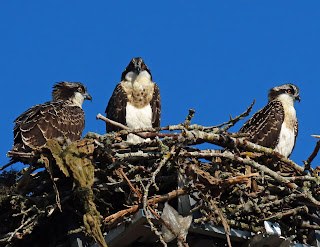 Three healthy looking juveniles on the Murlark Ave. nest site.  Easily identified as juvenile by the white edging on their feathers. The bird in the middle obviously has a full croup, a good indication they are getting fed. This nest site is only about a block away from the river. 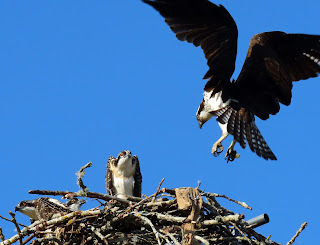 While watching the juveniles I noticed a forth bird circle around, which gave chase to a fifth bird, an obvious interloper. She continued to circle the nest, producing clucking noises toward at me.  Eventually I figured out that she was not going land at the nest as long as I was pointing a camera around, so I hid out of sight under a tree.  Then she came into the nest. 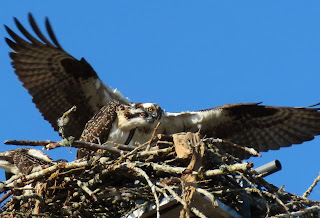 You have to look close at this photo to notice that there are actually two Osprey.  They are so close together that they look like one bird.  It actually appears that the mother is giving a protective hug to one of the juveniles.  Adults are easy to identify by the yellow eyes, where as juveniles have brown eyes. Click on the image for a closer look.