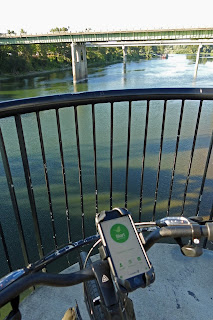 In this photo I've stopped my bike on the Historic Union Street Railroad Bridge over the Willamette River in Salem, which is now a pedestrian/bicycle route. I've paused in the approximate middle of the Willamette River which is the boundary between Polk County on my right, and Marion County on my left.  I'm about to enter Marion County to make an eBird Observation List for the Salem Riverfront Park. My I-Phone is mounted on the handle bars and I'm ready to hit the green circle to start my observation list.

For a complete year now I have been putting up with the pain of planter fasciitis.  I've been using custom orthotics, special shoes, and massage, all to no avail. Staying off my feet could possible allow it to heal, but that is not going to happen.  So here is the second day on a new plan, do my birding from my bicycle rather than walking.  I'm pretty pumped from what I have experienced so far.  I throw my bike in the back of our van and drive to Wallace Marine Park where I unload the bike and take the bike path across the river and into Salem Riverfront Park, pausing at the sight or sound of a bird to locate it and if possible, get a photo. 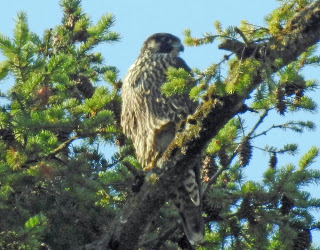 This first photo is of a juvenile Peregrine Falcon who just lost it's attempt to catch a Belted Kingfisher.  I have been watching this juvenile and another for several weeks as they have been reluctant to leave their comfortable nesting area under the Marion Street Bridge.  This is the first day I have seen one of them on their own attempting to hunt down their own prey. 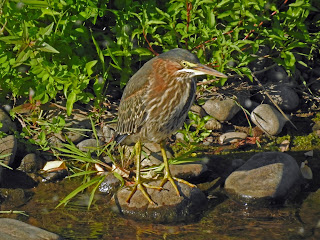 This second photo is of a juvenile Green Heron, photographed close to the Peter Courtney Bridge.  It's a great time of year to enjoy juveniles, they act, well like juveniles.  They have not yet learned the perils and dangers of life.  An adult bird would not take the chance to be standing out in the open for such a long period of time to be so easy to photograph.