First Osprey of the Year! 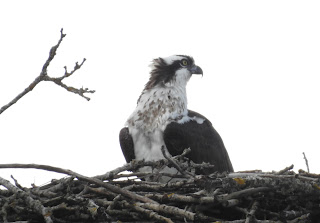 I got lucky today and found my first Osprey of the year at the Osprey nest site on Murlark Ave in West Salem. While the female was sitting on the nest the male was circling high above calling in his shrill voice. Jeanette and I have been watching this nest site on Murlark daily for the last couple of weeks.  For the past 4 years, the first Osprey to be seen in West Salem at the 6 nesting sites I keep track of has been the Murlark Ave nest site.  Last year it was on the 18th of March, so their showing today is pretty much on time.  Osprey are known to return to the same nest site year after year, and I have reason to believe this is the same female as nested here successfully last year.  Female Osprey have a spotting on the chest that is often referred to as a necklace.  Her necklace is unusually broad and high up the neck.  See the photo below, taken on the same nest site on March 25, 2018. Why this nest site has constantly been the first to be occupied each season is purely speculation on my part, but perhaps they winter closer.  Maybe instead of migrating clear to South America, this is a pair that winters in Mexico and has less distance to travel in the Spring migration back North. 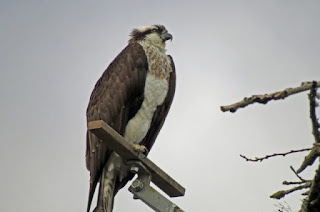