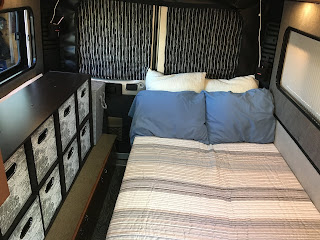 I wrote a blog on September 16th titled "New Designs and Improvements" that show-cased fixing up our twin bed set-up in our new-to-us 2017 Zion. (See here) We have continued to take shake down outings to make sure all systems work.  In fact we took four trips, 3 to the coast and 1 to south-central Oregon.  On each one, the twin beds where one of the unsolved issues. Still Jeanette has plowed on, and we now have Arrangement 2.0.

The floor plan on our Zion has a side mounted couch in the rear drivers side, which can be used as one of the twin beds.  But, it can be also be folded out and presto you have a small double bed.  As we began to work with this new bed arrangement, we realized the couch on the passenger side was kind of wasted space, but could work for storage.  Next was a trip to Lowe's where we bought and assembled this 8 bin storage module. By removing the seating cushion we had a nice solid platform to mount our storage module.  Storage is always an issue in class B vans, meaning there is never enough.  That issue is now also solved.

The main issue was the bed.  We gave the new double bed a trial run in our drive way last night.  A success! We both got a good nights sleep. We can now move forward with plans for California and Arizona.
Posted by The Rambler at 3:31:00 PM