This as been an intense year of watching the Osprey at the Salem Audubon Nature Reserve.  It's the fourth season we have had nesting Osprey. Each year I learn a little more, so by now I have some idea about whats going on and what to expect.  The first Osprey sighting in the West Salem area this year was on March 23rd at the Murlark Ave nest site. At the Reserve it was April 5th when the male showed up. It has been a record year for rain, which meant that the nearby Williamette River, the Osprey's main food source, ran high and muddy much longer than normal, making fishing by the Osprey almost impossible.  There was little evidence of fishing success and they looked gaunt, causing a good deal of worry on my part. Now all my worries have vanished as we discovered we have two chicks in the nest. I was at the Reserve on Wednesday the 21st and had no indication of any chicks, but Thursday the 22nd, arriving at the parking lot with Jeanette we heard the softer quieter call of what we suspected were chicks.  We could see the female striping flesh from a fish, which she seemed to eat herself, but after awhile we noticed she was feeding a chick, which began to get bolder and even started to demand food.  Backing up the days, I am estimating that incubation began about the 10th of May. Fledging should be around 50 days from now.  Last year the first sighting of chicks was the 20th of June. 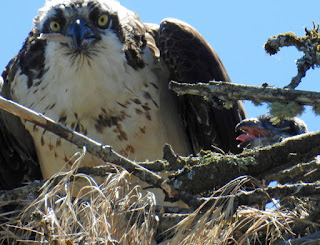 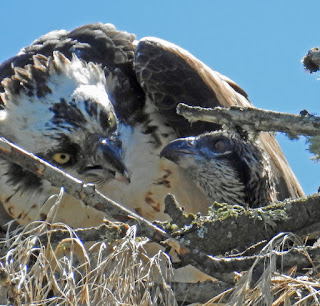 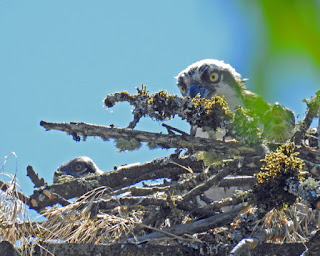