This morning I dropped by the Audubon Nature Reserve on Eola Drive to check out the Osprey nest.  As I was exiting my pick-up the female flew in with a long stick.  I would have expected her to bring a fish not a stick.  I panicked for a moment thinking perhaps the nest had failed and she was attempting to rebuild the nest.  As I walked around the nest for a better position to see the bird or birds, I was rewarded with a chick poking it's head up.  Perhaps mom just had in mind improving the nest.  The nest is built upon a large circular platform atop a high power pole, so doesn't need a complicated big pile of sticks to retain it's integrity. 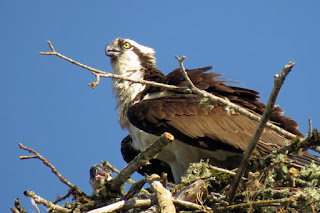 Flushed with my success at the Reserve I decide to check out the nest on Murlock Dr.. You can see in the photo below it contains the two adults plus two chicks.  This Murlock site was the first to start a nest this season as it has since I have been paying attention for the last three years. 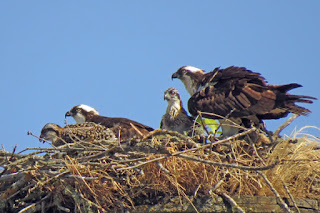 I also swung by the Patterson Street nesting site to check on it.  From the photo it looks like we have two adults but no chicks in sight at this time.  Of the three nesting sites, I think this was the last to get started this year. All three of these nesting sites are within a mile of each other in West Salem.  We are so fortunate that Salem Electric has erected these poles and platforms for the Osprey.  It's certainly a big help to the Osprey in encouraging them to nest on the platforms instead of the the electric power poles.