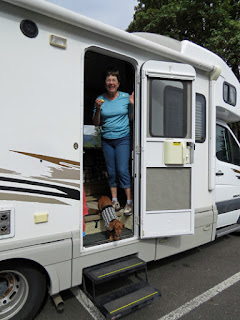 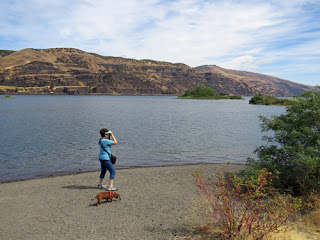 Back On Familiar Turf 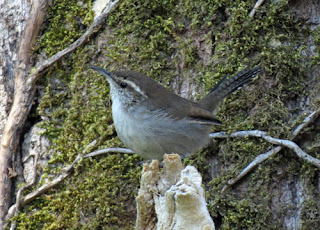 We are back home in Salem, and this Bewick's Wren is one of the birds we found during our Buster/bird walk this morning at Wallace Marine Park. See bird list here. It's one of a handful of parks within two miles of our home that we frequent on a regular basis.  In fact, in number of birds observed, it's probably one of our most productive.  Our total species seen at this park is now at 68. In part it may be because of the wide variety of habit from open fields to riverside riparian area that makes it so rich in species. We are still in the midst of unpacking and settling in after our busy summer of volunteering at the Oregon Dunes National Recreation Area on the Oregon Coast. But seeing this familiar favorite of ours, the Bewick's Wren, gave us a reassuring feeling that we were indeed back home.
Posted by The Rambler at 11:03:00 AM 1 comment:

In Search of Egrets 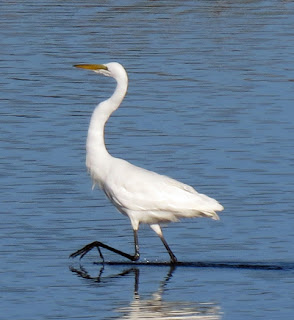 A Great Egret steps carefully while wading in the Smith River Estuary this morning searching for his breakfast.

Most people probably view our volunteer work with Western Snowy Plovers as a birding experience, and thus would be aghast at the idea of Jeanette and I going birding before going to work most days. But that is exactly what happened this morning.  After a quick breakfast we packed up our gear and Buster and made a quick trip down to the Smith River to one of our favorite eBird Hot Spots, Stables Road, for some pre-work birding.  Here is a link to our bird list and some photos.

The reason for our trip to Stables Road is a fellow birder has twice reported seeing a Snowy Egret here, which is quite an unusual sighting.  A Snowy Egret is quite distinct in comparison with other egrets with it's black bill and legs and it's yellow feet.  Although we were able to find 30 Egrets as in the photo, all had yellow bills and black feet indicating Great Egrets.  We had so much fun we are far from discouraged and plan on a repeat trip in the morning.
Posted by The Rambler at 4:35:00 PM No comments:

I left for duty this morning feeling kind of low. We are on the downward side of the nesting season, all of the nests have now hatched and there seems little reason for me to make a big effort to keep people out of the nesting areas. When I arrived at my location, I walked down the beach alone in my thoughts.  Then I heard a plaintive call I did not recognize, but looking I found this concerned male Snowy Plover, and a short distance away the target of his call, a young chick.  The chick eventually scurried out of harms way.  As I turned north to retrace my steps the dad began heading north too, trying to lure me away from the area of the chick.  I realized there is still a valuable service to provide in keeping beach goers out of the greater area until the chicks are able to fly and be on their own. 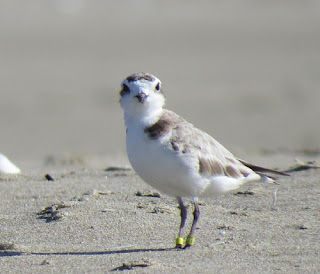 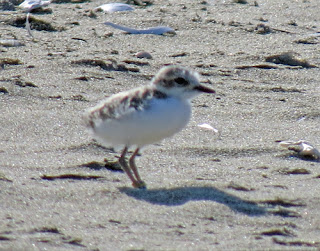 Best Birds of the Day

The two best bird photos of the day are the plovers shown below.  Although they are both plovers, they are extremely different in a number of ways besides just looks. 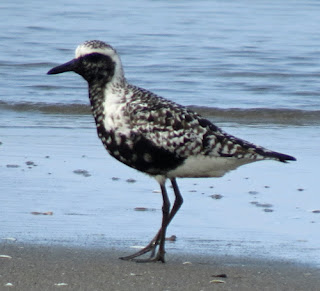 This Black-bellied Plover is an adult, shown still in its breeding plumage.  Its passing through on it's migration route from breeding grounds far to the north in the arctic, and probably heading further south for the winter. It's an easy bird to spot at 11-13 inches in size with its highly contrasting colors, which it seems to carry in a regal way. 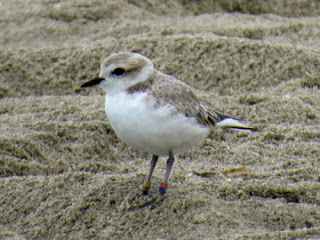 This is a juvenile Western Snowy Plover, born this summer close by and probably will stay in the area and breed and raise its young here. Snowys are half the size and are hard to spot because at a moments notice they will squat down in a depression hiding their white undersides with only the top sandy-side showing. They have a rather dumpy look to their posture in comparison to the Black-bellied Plover.
Posted by The Rambler at 3:24:00 PM 2 comments:

Friends We Have Made 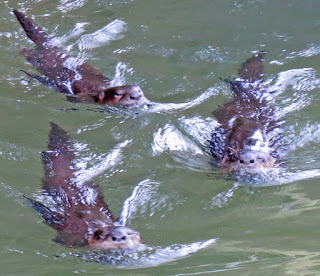 Yesterday morning I was standing on the bridge over the Siltcoos River before heading out on the Waxmytle Trail for my volunteer duty, when this family of three River Otters swam up the river and under the bridge. They seem like old friends as we have enjoyed watching them all summer.  It gave me pause as this summer is rapidly coming to a close to think back on some of the friends we have made. There is the family of three Great Blue Herons we enjoyed keeping track of on our walks on the Siltcoos Lagoon Trail. A mother Raccoon and her young one that went from a cavity nest in a Spruce tree to fishing trips in the lagoon. Plus there is the Chipmunk that has a food stash in a tree just a few feet from our motor home window in our camp site.  And then there are the little Snowy Plovers that I delight in spotting daily. But I was reminded of some other friends we have enjoyed here this summer.  John West is one of the first that comes to mind.  He camped here for a good many days kayaking the river and photographed this family of three River Otters numerous times. Another friend that comes to mind is Glenn Pannier.  He enjoyed camping at Waxmyrtle so much he has become a volunteer.  He has also photographed these same three otters, in fact he has photos of them rolling in the sand. We have also had a good number of friends come and camp with us at Waxmyrtle during our stay. Looking back I feel very fortunate for all the friends, animal and human alike that have shared in our summer.
Posted by The Rambler at 4:43:00 PM 2 comments:

A Day Off and A Great Hike 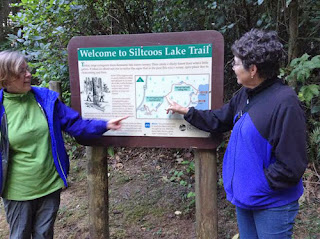 Jeanette and friend Debbie Kliever point out the route of our morning hike on the Siltcoos Lake Trail. Some years ago before my son Michael created this blog for me to use I reported most of my exploits in the Trip Journal of Cascade Ramblings.  Over time the blog has turned out to be the easier format to use, and consequently I use it to report our adventures almost on a daily basis. Today’s hike on the Siltcoos Lake Trail was such a great event that it seemed a worthy candidate for the Trip Journal.  Click here to read the Trip Journal. 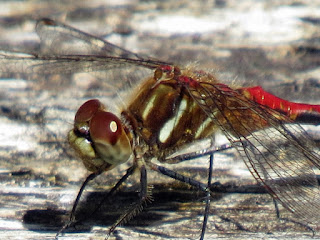 You can probably guess why this Dragonfly is called a Striped Meadowhawk, they have two pronounced white stripes on the thorax and hang out around wet meadows.  This close-up was taken on July 30th on the Lagoon Loop Trail. Dragonflies continue to captivate my attention.  Jeanette gave me a book for my birthday, Dragonflies and Damselflies of the West, and I added Dragonflies and Damselflies of Oregon, so I now have sources to consult on the puzzle of identification of the various species I am seeing and photographing here in the Oregon Dunes National Recreation Area.  Here is a link to the current list of Dragonflies in the Critters section of Cascade Ramblings.
Posted by The Rambler at 8:19:00 AM 2 comments: