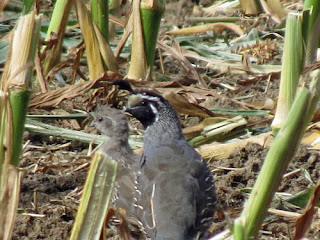 You will need to look closely to see the chick being carefully guided by his concerned dad through the leftover stubs of the corn field. You can also see that dad has his eye on us as he  shepards the chick out of harms way. The corn field borders the west side of Maud Williamson State Recreation Site. On the east side, the park is bordered by the busy Salem-Dayton Highway.  This park was a gift to the State of Oregon by the family that once lived in the historic house located on site.  To be perfectly frank, the park gets used the most from motorists stopping to use the restroom, but Jeanette and I have discovered it to be a convenient and productive destination for birding.  It is one of probably close to a dozen parks that I have suggested to eBird as a birding Hot Spot. Two weeks ago when we last stopped here the adjoining cornfield was a tall jungle, impossible to see any birds.  On this trip the corn had been harvested, and the open field was being used by a variety of birds to glean the leftovers. You can see our birding list here. 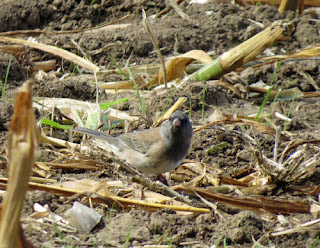 This park was one of four stops for the morning on a sort of "grand finale" of birding to close our summer with good friend John West prior to his returning to Arizona.
Posted by The Rambler at 8:27:00 AM