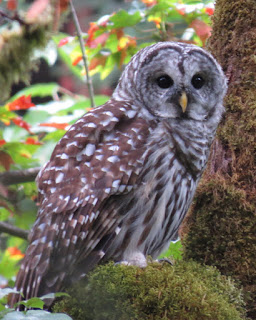 Although our morning was filled with yard projects and grocery shopping, Buster our dog still had the notion that he should have a walk.  I once explained to my mother while she was confined to her bed in a memory care unit that we take Buster for a walk everyday because it was good for him.  No longer being able to communicate very well, we were shocked when she replied, "it's good for you too". Jeanette and I often reflect on her advice and we also credit Buster with a number of our good bird finds.  Days like today filled with work to get done, we would have opted to stay home, but he gets us out and as on many other days, today we were rewarded with a surprise sighting and photo opportunity of a Barred Owl at the nearby Darrow Bar State Park.

The Barred Owl is a relative newcomer to Oregon.  Once only native to the Eastern United States it has made a rapid advance West and now is starting to be a common sight in Western Oregon.  This is the third opportunity I have had to photograph a Barred Owl, and all have occurred during the day along a trail.  In all three cases, they have stayed put long enough for me to photograph, which leads me to believe they tolerate humans pretty well, which might be one of the key factors in their successful geographic spread.
Posted by The Rambler at 3:20:00 PM