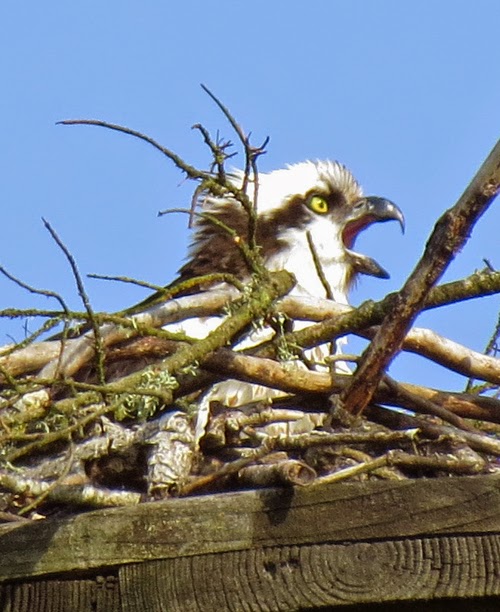 This female Osprey screams out her siren's song atop the nesting platform at the Salem Audubon Nature Reserve this morning. Minutes later two other Osprey appeared in a confrontational flight overhead. My take on this is the call worked, and I say-- may the best man win.

I seem to be off on a new tangent in my birding obsession; Osprey behavior.  I have now located six Osprey nesting platforms within an approximate two mile radius of my home in West Salem.  I checked-out all six this morning. Four of the six appear to have been claimed and the Osprey seem to be in various stages of their relationship.  The pair on the nest site on Murlark Ave NW were photographed copulating on March 30th by John West. The pair on Riverbend Road NW, I just found two days ago, and they see inseparable. The females screaming away at Wallace Marine Park and the Audubon Reserve appear to still be in the courting phase.  I have yet to see any birds on the nesting platforms on Wallace Road or Patterson Street NW. Stay tuned, I will be reporting more in the days to come.
Posted by The Rambler at 1:43:00 PM