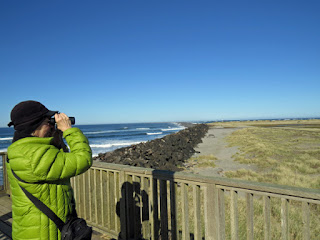 We spent the morning at Fort Stevens Park exploring the Clatsop Spit area and doing some birding.  Jeanette is shown on the viewing tower at the South Jetty.  From the tower we had good views accross the Columbia River to Cape Disapointment on the Washington side. On the beach to the south of us we could see lots of people busy claming on the beach on the receading tide. 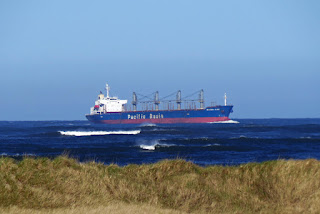 We were treated to a ship, the "Pacific Basin" coming into the Columbia River. 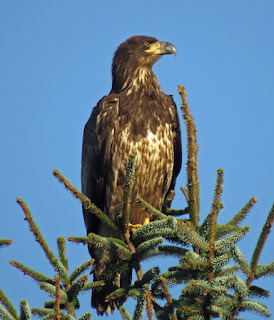 The best bird photo of the morning was this immature Bald Eagle, one of three we saw plus a mature adult. The eagles and many more birds where seen at the beach access from parking lot D.  Here is a link to our bird list. We spent the afternoon working our way south to Nehalem Bay State Park, stopping in Seaside for groceries, and lunch at Del Ray Beach State Recreation Site. Leaving Del Ray we spotted a male Northern Harrier flying with a snake.  He was being chased by a female Harrier. We couldn't help but wonder if more was going on here, was these part of a breeding behavior? Arriving at Nehalem Bay State Park we again had the problem of too many sites to choose from. 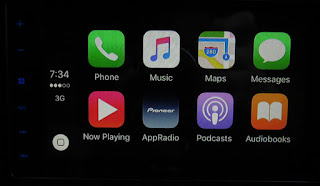 Actually our largest problem of the day is related to this photo.  Besides testing out our new van, we are trying to get up to speed on a new radio.  This is what the screen looks like in the Car Play mode, when connected to our iPhone.  From this touch screen we select Maps, which is a mirrored image of the phone, and becomes our navigation system.  Which is all pretty trick, but for the last two days we have put up with a lot of frustration because the Apple Maps do not seem to jive with the Oregon State Parks signs.  So twice now we have found ourselves winding through strange neighborhoods trying to get to a simple destination of an Oregon State Park. It appears that Apple thinks it's a better idea to take short cuts using side roads than follow the signed main routes.