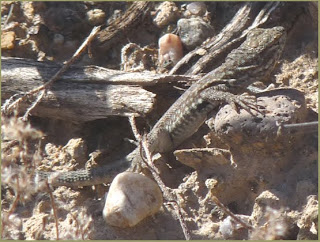 We have been having tempatures in the low 70’s for several days now and on Friday’s Nature Hike we saw quite a few lizards along the trail. They are tiny and hard to get a close look at as they scurry off among the rocks. I took a photo or two and spent the afternoon struggling to make an identification. I had taken a close up photo of one last month, but it was only after a renewed effort yesterday that I got the identification right. What I originally thought was just a shadow on the side behind the front arm, turns out to be the identification mark of the Side-blotched Lizard.
Posted by The Rambler at 6:17:00 AM