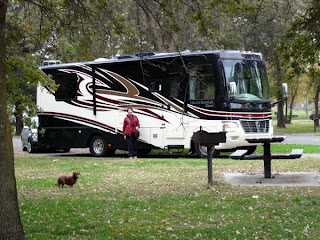 We had to continue fleeing south ahead of the storm yesterday. We left Yreka in the morning as the rain was just threatening. High winds between Yreka and Weed made for some treacherous driving, the best I could do was only 45 miles an hour. Once we descended down to Dunsmuir we were out of the wind and driving was back to normal. We got gas and lunch in Anderson and then drove on to Red Bluff where I wanted to try camping at the Lake Red Bluff Recreation Area. Here we are in our eight-dollar site in the Sycamore Campground. The no-hook-up sites are actually sixteen dollars, but with a Senior Pass it's half price. We got in a great hike on the park trails just before the rain hit at 3:00. Looking at the road cams later I could see snow on the route we had just driven, in fact snow was reported as low as Dunsmuir.
Posted by The Rambler at 6:35:00 AM