Yesterday we devoted to surveying seven Osprey nest sights here in Polk County.  Of the seven, three were empty at the time we checked. Riverview Park in Independence was empty, but we have photographed a bird there previous days, starting with a male on March 19th. The Live Stream Camera is active now and we have seen multiple birds there, and even breeding going on.  Salem Audubon Nature Reserve nest was empty, and as far as I know, none have showed up yet.  The Patterson Street nest site, also in West Salem was empty, and the camera of Salem Electric has not shown any birds yet. Below are the nest sites with birds. 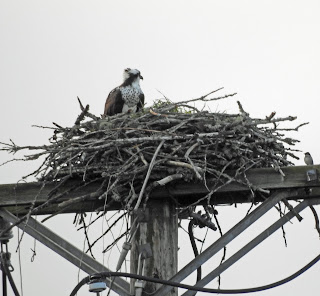 The former Willamette Mill site in Dallas has a nest on an abandoned power pole. There has been this female hanging around since March 18th. We have observed her eating fish, doing a breeding display, and nest building. No actual sighting of a male, but I believe that the male was one of birds we have seen and others have reported along Rickreall Creek beginning on March 12th. 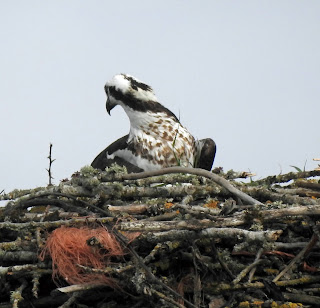 This is a nest on a platform on Buena Vista Road, south of Independence. The female is on the nest, and the male was on a tree right next to the nest. We have photographed Osprey here near the nest since March 16th. 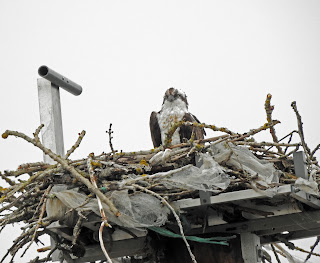 Murlark Avenue in West Salem has a nest platform put up by Salem Electric and always has the earliest Osprey. This year our first observation was March 18th. This is the female on the nest.  The male was not around. 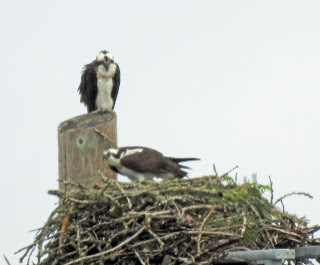 The last nest we checked was in Wallace Marine Park. The male was on the post and the female was doing her best with breeding postures, but with no success. This was our first check of the nest this year.