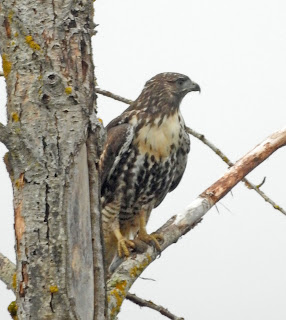 Forest fires ranging down the west slope of the Oregon Cascades have clogged the Willamette Valley and virtually the entire state for the last two weeks with smoke, starting on Monday the 7th.  For most of the time I tried to stay inside to avoid the health threatening smoke.  On this Friday, the 18th, the rains mercifully arrived and the air began to clear.  Saturday we ventured out on a short walk here in Dallas City Park just a couple of blocks away.  Sunday we felt brave enough to drive to Salem and bird at an old favorite, Fairview Wetlands.  We began birding at this location 22 years ago when we would walk from our home on Reed Court.  Now days the Fairview Drive area is completely filled in with industry, and many workers walk the trails on their breaks.  For that reason we make it a practice to only bird there on the weekends. We were excited to see what changes the recent smoke and rain would bring to the bird population. The rain was insufficient to bring any water to the dried out wetlands, but we saw lots of evidence that the clean air had put the birds on the feed.

If you look close at the top photo of the juvenile Red-tailed Hawk, (you can click of the photo to enlarge) you can see it is clutching its prey in its right claw, presumable a rodent. In the lower photos you will see a Steller's Jay and a California Scrub-Jay harvesting acorns. We had a great morning birding at Fairview Wetlands once again, busy with birds and filled with memories. You can see our observation list and more photos here. 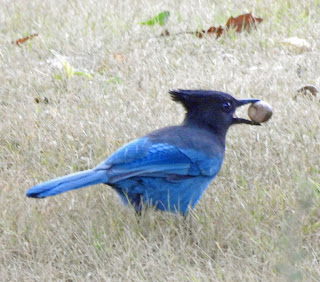 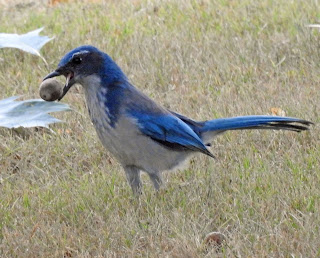