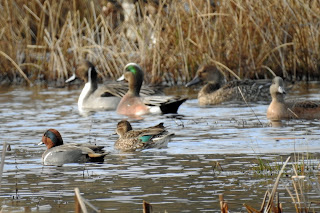 For bird photos I use the Nikon Coolpix P900 with the amazing x83 zoom.  This shot was at such a distance I had no idea of what kind of ducks I was photographing.  Immediately after taking the photo I knew I had a collection of birds, but it wasn't until I down-loaded the photos into my laptop that I was aware that I had three separate species in the one photo. Jeanette had already counted a good number of Green-winged Teals and Northern Pintails, but it wasn't until taking this photo I realized that we also had two American Wigeons.
Posted by The Rambler at 8:20:00 AM